COVID is still with us. Vaccine resistance is real, and it is dangerous

That there are a lot of people who are vaccine-resistant will be news to no one at this point. I wrote about this on May 17, 2021 (COVID, Vaccine, Racism, and Masks: Changing for better or for worse?), and while many people who were initially resistant have now changed their minds and have gotten (or in many cases, are trying to get) vaccinated, there is a hard-core residual group. There are a variety of reasons that people have, and sometimes articulate, for not getting vaccinated.  These include a lack of knowledge (hard, I know, given the amount of discussion) and a mindset that disbelieves those who are in power (also in some ways understandable; they do lie a lot). This is complicated for some parts of the population, particularly members of minority groups like African-Americans and Native Americans, by the fact that the US history is loaded with stories of exploitation and oppression and infection, from the passing out of measles and smallpox-infested blankets to Indians to the Tuskegee experiments that denied treatment for syphilis to Black men and many other crimes.

But at this point, there are no responsible people at all who are urging folks to not get vaccinated. Virtually all doctors, epidemiologists, and scientists have been (with some effectively evil exceptions, such as Joseph Mercola, DO (The Most Influential Spreader of Coronavirus Misinformation Online). Inversely, I mean anyone who is (which unfortunately includes many politicians, FoxNews personalities, and other “influencers”) is not responsible. COVID is real, it is infectious, the Delta variant is more infectious, it makes people really sick, and it kills people. A lot of people. Irrespective of whether they believe it is “real” or “dangerous” or not. Indeed, most of the people dying now (over 95%) in the US are those who have not been vaccinated. There is definite evidence that people who are vaccinated CAN get infected, and maybe even a few of them will die, but this is also definitely being overplayed by the media. Most of the media does not lie, exactly, but most people don’t go beyond the headlines and a very large number have no concept of relative risk or odds (I would assume, therefore, that poker players have been vaccinated!) You can cross the street very carefully, on a green light, at a corner, looking both ways, and still be hit and killed by a car driven by a lunatic speeding around the corner. But it is pretty unlikely compared to, say, running across a busy 6-lane highway without looking. Most folks can get that kind of relative risk, and it is not really unlike the risk of being vaccinated or not. This graphic illustrates that risk: 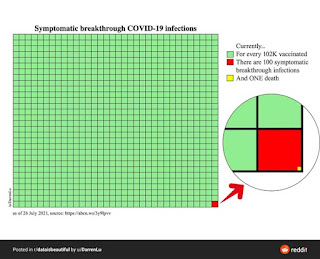 Another way to express it, with a more traditional line graph, by county: 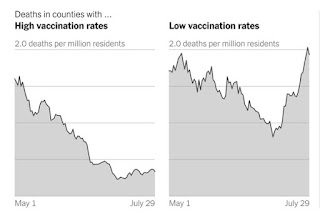 A recent article in the NY Times, “Workplace vaccine mandates reveal a divide among workers” describes another way that workers are being divided, not just by whether they are willing to be vaccinated, but by whether their employers are willing to mandate (and pay for) vaccination for them. Apparently, they are for white collar workers who they want back in the office (not clear why) but not necessarily for the blue collar workers, those who actually do work that cannot be ‘phoned (or Zoomed) in’ but requires their physical presence, those people who have often been called essential workers. Walmart, for example, ‘announced mandatory inoculation for employees at its headquarters and for managers who travel domestically. For a sense of scale, about 17,000 of Walmart’s 1.6 million employees are expected to work in new headquarters in Bentonville, Ark.’ The argument for this seems to be that companies like Walmart need lots of workers and don’t want to alienate those who don’t want to be vaccinated by mandating it. But somehow it is ok for office workers. I am not sure that I understand this, but it must have something to do with pay: if you get paid a reasonable living wage you are more likely to be willing to get a mandatory vaccine, and you should anyway. It seems to me that if Walmart and other companies wish to increase the demand for their jobs, the better way to do it is: pay more!

We read that ‘Trump's COVID-19 testing czar warns the unvaccinated: 'You’re going to get the delta variant' (The Daily Kos article’s author notes that they didn’t remember that #TFG had  a testing czar. Neither did I.) Of course, a lot of people regret having not been vaccinated once they end up sick, hospitalized, and on a ventilator, like conservative radio talk show host Phil Valentine and others covered in a recent article in Rolling Stone. The NY Times also had an article titled “They Spurned the Vaccine. Now They Want You to Know They Regret It”. I heard from a friend about a hospital-based health professional (not a physician) they knew who had been vaccinated but ended up on a ventilator, which was very concerning. A few weeks later, we called to follow up. Guess what? Turns out they weren’t vaccinated; they and their whole family were lying. Embarrassed. Reassuring, in one sense, but also very worrying that folks are lying.

I hope that others who have reservations will take their advice and get vaccinated. It is, of course, a bit disingenuous; if they knew they were going to get sick and maybe die they would have gotten vaccinated. If we had known  that the roulette wheel was going to come up black, we would never have bet on red! You can’t be sure what will happen to you, but the important point is that you have to do it because you might, and at least as important, because you can infect others.

But there are many people who steadfastly believe that being vaccinated is not for them, and some who believe that it is not for anyone. They are getting sick, and will continue to get sick, and infect others, and cause others to die. They will not wear masks, and they will not wear signs. When they say that vaccine mandates, or mask mandates, are oppression, they are being, frankly, ridiculous.

The pandemic is not over. Delta is very serious. Get vaccinated. Wear a mask indoors.

I cannot resist including two other posts that make that point: 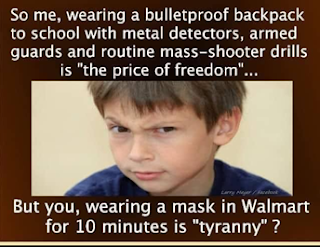 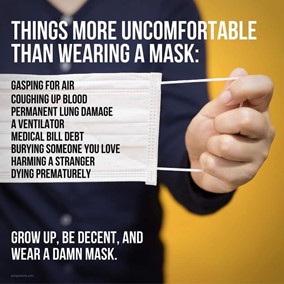