Rich hospitals get the bulk of government bailouts: It's the American way!

The world isn’t fair. The US isn’t fair. It isn’t equitable. It would be much better if things were more equitable, if everyone had the same starting line (or, to use a metaphor that might be more resonant with politicians and businessmen, started from the same tee), or if those who were starting from farther back got extra help to get them closer to being on a par. Par is another golf term, and actually in golf this is actually done. The “handicap” is an amount subtracted from the scores of weaker golfers (in golf, lower scores are better) to make the competition more fair. Unfortunately, it never occurs to the presidents and CEOs who play on the golf course to apply this same strategy to the actual world, to regular people and businesses.

In fact, it is those least in need benefit most from government policies. It has been clearly demonstrated that the 2018 tax cuts had little benefit for the middle class or working class, less yet for the poor whose incomes are so low they scarcely pay taxes, but was a bonanza for billionaires and mega-multi-national corporations. This is no less the case with the next multi-trillion-dollar coronavirus relief bills, where the richer you are the more you get. Nicholas Kristof points out that ‘a single mom juggling two jobs gets a maximum $1,200 stimulus check — and then pays taxes so that a real estate mogul can receive $1.6 million. This is dog-eat-dog capitalism for struggling workers, and socialism for the rich.' He is correct, and it is unconscionable. Franklin Roosevelt would certainly be appalled; I use a quotation from him that is inscribed in the FDR memorial in DC as the epigram for this blog.  By this measure we not only fall flat, we invert; you’d have to go back even before the “Roaring ‘20s”, at least to the “Gilded Age” of the 1890s to see such inequity enshrined. For a good, concrete, example of how MUCH a billion dollars is and how those who have multiples of it are so far from the rest of us, and how incomprehensible it is to expect working people to bear the brunt of need, Tom Lutz of the Los Angeles Review of Books writes:
In other culture news, The Atlantic laid off 68 people, and the LA Times made everyone take a 20% pay cut, which will save the paper $2 million in a year.
Patrick Soon-Shiong, who owns the LA Times, has a net worth of $7 billion, so one year's 5% return on his wealth would cover that $2 million savings for 175 years. Or he could just cover for this year and have a net worth of $7,348,000,000, instead of $7,350,000,000. Laurene Jobs owns The Atlantic. Her net worth is $23 billion; 5% return on that in one year would pay those 68 fired staffers $100,000 a year each for 169 years. Or she could just pay for this year, and not kick 68 human beings to the curb to face the worst unemployment in 70 years. If she did that, at the end of the year, instead of $24,150,000,000, she would only have $24,143,200,000. That difference is surely worth ruining the lives of 68 people for. Her Apple stock alone went from $7 billion to $12 billion over the last 12 months. That appreciation could pay the fired 68 staffers $100,000 a year each for 735 years. and she still would be one of the 40 richest people in the world.

FDR was famous for the “New Deal”, a mixture of programs to put Americans back to work and to bring us out of the Great Depression. Congress and the executive branch have, in response to the coronavirus pandemic, trotted out literally trillions of dollars, but unlike Roosevelt have done their best to ensure that the most goes to the least needy. It is not just regular people who are affected; bailout money intended to offer relief to small businesses (already generously defined as fewer than 500 workers) went largely to much larger businesses. Some of this was blamed on administrative mistakes in a rush to get the money out, but huge corporations did in fact get lots of money, and didn’t give it back. And, in case you were wondering when I was going to get to health care, the same dynamic is playing out for hospitals.

The pandemic has hit hospitals hard, particularly those in high-prevalence places (like New York City) and particularly public hospitals and others that care for the poor in the best of times. Although most rural areas have not had as high an incidence of coronavirus infections, rural hospitals were teetering on the brink before the pandemic, because a hospital is an expensive operation to run and rural areas have, well, less dense populations. And populations, also that are more likely to be old and poor. Which are two risk factors for getting and dying from COVID-19, but are also risk factors for a lot of other health issue. This is why such hospitals – small rural hospitals, overwhelmed inner city hospitals, hospitals with true need, should be getting the bailout money to help them in this crisis. But – and I doubt this will come as a surprise – they are not getting most of the help, and most of the help is going to big, money-rich, hospital chains, the hospital equivalents of billionaires and multi-national corporations.

A recent article in the New York Times, ‘Wealthiest Hospitals Got Billions in Bailout for Struggling Health Providers’, with the subhead ‘Twenty large chains received more than $5 billion in federal grants even while sitting on more than $100 billion in cash’, begins
A multibillion-dollar institution in the Seattle area invests in hedge funds, runs a pair of venture capital funds and works with elite private equity firms like the Carlyle Group.
But it is not just another deep-pocketed investor hunting for high returns. It is the Providence Health System, one of the country’s largest and richest hospital chains. It is sitting on nearly $12 billion in cash, which it invests, Wall Street-style, in a good year generating more than $1 billion in profits.
And this spring, Providence received at least $509 million in government funds…. 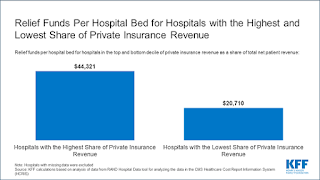 While all hospitals have taken a financial hit from the cancellation of high-profit elective procedures, some, like Providence (and there are many others) have big-to-huge cash reserves, while others can barely make payroll month-to-month. In the typical rich-get-richer scenario that characterizes the US all too often, those hospitals that have high profiles (read: take care of well-to-do people) not only do not have to make it on low-reimbursement uninsured and Medicaid (and even Medicare) patients, the get big donations, as detailed in “One rich NY hospital got Warren Buffett’s help. This one got duct tape”, NY Times April 26, 2020 (updated May 20). As all too often with “philanthropy”, the rich give to organizations that benefit the rich, and take a tax break for it. And so do the hospitals, most of which are organized as “non-profits” but act like for-profit businesses, but don’t pay taxes. Much of the data in the May 25 article comes from this Kaiser Family Foundation report. It documents that the biggest recipients of aid were for-profit and wealthy “non-profit” hospital systems.

How does this happen? By intent or sloppiness? I don’t know.
While Health and Human Services also created separate pots of funding for rural hospitals and those hit especially hard by the coronavirus, the department did not take into account each hospital’s existing financial resources.
“This simple formula used the data we had on hand at that time to get relief funds to the largest number of health care facilities and providers as quickly as possible,” said Caitlin B. Oakley, a spokeswoman for the department. “While other approaches were considered, these would have taken much longer to implement.”

Most people are decent people; if a package is mistakenly delivered to your house but is addressed to someone down the street, you don’t keep it. If the person who was supposed to get it is aged, disabled, poor, or otherwise in need, and this package provides some relief – perhaps food, clothing, medicine, you are especially concerned to make sure they get it. This kind of morality does not apply to billionaires or to wealthy corporations, whose absolute greed to grab anything that they can get their hands on, no matter who else suffers, would make the highwaymen of yore, or Mafia dons, blush.

“If you ever hear a hospital complaining they don’t have enough money, see if they have a venture fund,” said Niall Brennan, president of the nonprofit Health Care Cost Institute and a former senior Medicare official. “If you’ve got play money, you’re fine.”’ Well, they’re fine. And I guess you’re fine if you can afford to go to one of them, not the hospitals that serve the people with the greatest need. And if you don’t think about it too much, you can probably sleep at night.

I don’t see how the CEOs and Boards of these hospitals do.
Posted by Josh Freeman at 8:06 AM No comments: