I was recently honored to be invited by the Department of Family and Community Medicine at the University of Texas Health Science Center in Houston to give their annual "Withers Lecture", which is named for and supported by the family of Henry A. Withers, MD, a family physician and Houston civic leader. My topic was Social Justice and Health. I am "serializing" the talk in this blog, with the first part today. For those who prefer looking a powerpoint slides, they are attached under "Links to documents in Google Docs" in the navigation bar on the left.


“Justice” is most commonly thought of in terms of courts of law, epitomized by a blind goddess holding a scale – and often

a sword. Thus justice can be seen – and is seen by many – as punishment for crime s or transgressions. The rule of 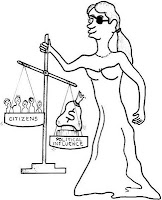 law may be necessary for a civilized society, but legal decisions, even in country such as ours, are not always just: think of the death sentences overturned by new DNA evidence, of the cases right here in Texas where a person was convicted of a capital crime while their court-appointed attorney dozed through the trial. Justice is, perhaps, in the eye of the beholder.

In the field of medical ethics, justice is one of the four key principles, but probably the least discussed. We often hear student groups discuss the relative implications of “non-maleficence” (do no wrong) and “autonomy”, as, for instance, when a person wishes a costly intervention that physicians believe will not help and may hurt (the fourth is "beneficence", do the right thing). But “justice” refers to the concept that people with the same conditions should have the same treatments available.  What, then, is “social justice”?

Also known as “distributive justice”, the term social justice was popularized by the philosopher John Rawls in the 1970s, although obviously the concept has been in existence, in one form or another, for centuries. In “A Theory of Justice”, Rawls writes:
“All social primary goods – liberty and opportunity, income and wealth, and the bases of self-respect – are to be distributed equally unless an unequal distribution of any or all of these goods is to the advantage of the least favored.”[1]
While this seems pretty expansive, as it says “distributed equally”, the inclusion of the phrase “to the advantage of the least favored” suggests that things are not completely equal because there are people who are least favored. For example, even in a much more equal society, some people may be suffering from physical or mental challenges that require them to utilize more resources. From a medical perspective, we have to consider whether  people who advocate for the disabled, or the expenditure of large amounts of money for the diagnosis and / or treatment for those who are close to them may see it as their individual “right”, but do not necessarily support other people having the same rights.

A somewhat earlier authority, Franklin Roosevelt, said that "The test of our progress is not whether we add more to the abundance of those who have much; it is whether we provide enough to those who have too little." This does not suggest that everything be divided equally, but makes a different moral claim: that what we do as a society (and it is fine to read “government”) should be to help those who need the help most rather than those who need it the least. Often in history, including today, that concept is rejected by many. In any case it is clear that, today in US, we do not have a system of social justice such as that described by either Rawls or Roosevelt; rather We have a system in which the most privileged exert great influence, and (mostly seem to) use it to increase their privilege. More modern discussions of social justice and medicine can be found in the many writings of Paul Farmer, including Pathologies of Power and Partner to the Poor: A Paul Farmer reader, and in the online journal Social Medicine, published by the Department of Family and Social Medicine at Montefiore Medical Center/Albert Einstein College of Medicine.

What are human rights? The most authoritative modern definition is that of the UN Universal Declaration of Human rights, passed in 1948. Article 25 states that:
“Everyone has the right to a standard of living adequate for the health and well-being of himself and of his family, including food, clothing, housing and medical care and necessary social services, and the right to security in the event of unemployment, sickness, disability, widowhood, old age or other lack of livelihood in circumstances beyond his control.”

According to the UN Association of Canada (UNAC), while “originally the Universal Declaration was conceived as a statement of objectives to be pursued by Governments, and therefore it is not part of binding international law…. it is still a potent instrument used to apply moral and diplomatic pressure on states that violate the Declaration’s principles…. in 1968, the United Nations International Conference on Human Rights agreed that the Declaration ‘constitutes an obligation for the members of the international community to protect and preserve the rights of its citizenry.’”

So, then, how is social justice related to health, health care, and medicine? In 1978, the World Health Organization issued the “Declaration of Alma-Ata” (now called Almaty, it was then but is no longer the capital of Kazakhstan which was then but is no longer part of the Soviet Union!). It defined “health” as ““...a state of complete physical, mental and social wellbeing, and not merely the absence of disease or infirmity…” and asserted that it “… is a fundamental human right...” This has been an important cornerstone statement for the development of health care and primary care for the last 40+ years. Primary Health Care, which was also defined at Alma-Ata, is integrally tied to the definition of health:
“Primary health care is essential health care based on practical, scientifically sound and socially acceptable methods and technology made universally accessible to individuals and families in the community through their full participation and at a cost that the community and country can afford to maintain at every stage of their development in the spirit of self-reliance and self-determination”
Note here that health care is not limited to medical care, and that it is to be “universally” accessible. This statement makes an effort here to account for the different economic ability of different countries. I once heard a presentation on the Mexican health care system, which seems structured to provide universally accessible care, but does not always achieve this goal.  I concluded that in Mexico, they have the desire to provide universal access, but not the resources, while in the US we have the resources but not the desire. Under a social justice framework, this is far less defensible.

In 1848, the Prussian government sent a young physician named Rudolf Virchow to investigate an outbreak of typhus in the coal-mining region of Upper Silesia. His conclusion, that the social and economic situation of the residents was the main cause, is one of the first clear discussions of the social determinants of health; though he is famous for advancing the Cell Theory and his name is attached to dozens of medical eponyms (Virchow’s node, Virchow cells, Virchow’s autopsy, etc.), he may be best known as the “Father of Social Medicine”. In his report he observes that:
“The physicians are the natural advocates of the poor, and social problems fall to a large extent within their jurisdiction,” and that
“Medicine has imperceptibly led us into the social field and placed us in a position of confronting directly the great problems of our time.”

Of course, today we see much less typhus, but we still see much disease that results from social conditions. And typhus itself is not completely gone. In the 1983 Gregory Nava film “El Norte”, one of the lead characters, after finally reaching Los Angeles at the end of a long and grueling journey from Guatemala, dies of typhus contracted when she was crawling through sewers. Would she have gotten typhus if she had not been crawling through sewers? Unlikely. The “medical” question of “why” she got typhus would be that she was bitten by a rat-flea carrying Rickettsia typhae. But we must ask the next question, “where was she that she got bitten by a rat-flea?” and in discovering that it was in a sewer we must ask “why was she crawling through a sewer?” Finally, our question must be “what is wrong with a situation in which a person crawling through a sewer infested with rats, fleas, and Rickettsia typhae is better than the alternative?”