The NY Times recently reported on the controversy between Moderna and the National Institutes of Health (NIH) regarding the patenting of the Moderna (which NIH has called “NIH-Moderna”) vaccine for COVID-19. Moderna has applied for sole ownership of the patent, while NIH claims that at least 3 scientists it employs were instrumental in the basic science behind the vaccine’s development. This issue is important for a number of reasons: the specifics of this particular – and major – controversy regarding the vaccine, the larger issue of taxpayer support through NIH for projects that become private profit centers, the wider use of federal funds to support private profit, and even more generally the willingness and enthusiasm of both corporations and individuals to benefit from public expenditures while abjuring the responsibility for paying the taxes that make them possible.

The specific case of the “Moderna” COVID-19 vaccine is about more than money or glory; the Times reports

If the three agency scientists are named on the patent along with the Moderna employees, the federal government could have more of a say in which companies manufacture the vaccine, which in turn could influence which countries get access. It would also secure a nearly unfettered right to license the technology, which could bring millions into the federal treasury.

These two issues are very important. Most of the people in the world have not had access to the vaccine, and if the US government (through NIH) owns or controls the patent, it could (although so far it has not, and arguably could also do it under the Defense Production Act) ensure that poor countries with need can get it, and get it at an affordable price. This is far more important than the second, which is that it could make money from selling it to countries that can afford to buy it. It could even license the production of the vaccine by other countries in their own manufacturing process. This is a critically important concern; if all people across the world do not have access to effective vaccination, the coronavirus will continue to spread and mutate and spread back to the US and other more privileged countries. Getting vaccines to the world’s poorest countries must happen, but Moderna has been the worst of all the vaccine manufacturers (and none have been great), refusing to make the vaccine available to most countries, only offering it to those wealthy countries that can pay. (The company will make at least $18B from the vaccine.)

The larger issue is the support that the NIH gives to basic science research, mostly in universities, which is then acquired by pharmaceutical companies who manufacture the drugs based on that research and make enormous profits. No one disputes the huge profits made by Big Pharma, and only the most willfully blind (and of course the companies themselves) argue that they are fair or justified. Pharmaceutical companies like to talk about how much they spend on “R&D”, Research and Development, but (while cost allocation can be done in a number of ways), they spend much more on marketing than on R&D. 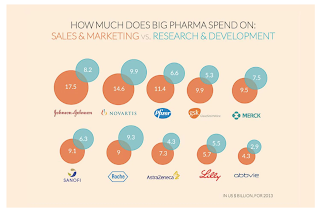 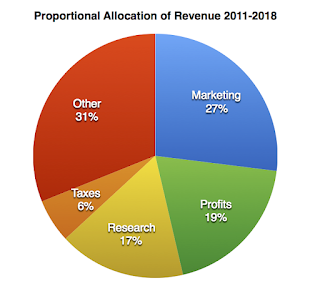 NIH spends over $40B annually on scientific research, and in 2020 and 2021 each about $5B specifically on emerging infectious disease research.  Most of the profit goes to the pharmaceutical companies, sometimes with some going to the universities who did the research, using NIH money, through collaborative agreements. But YOU* paid for the basic research.

Thus, beyond any issue with Moderna, the federal government spends lots of your money to support scientific research at the basic level, where the highest risk is (i.e., where the probability of discovering something that is likely to be marketable is lowest) with the drug companies acquiring only the most promising innovations to develop further. And it goes beyond drug companies, although they are among the most regular feeders at this government trough. Remember the bailout of the banks and financial services industries? The savings and loan crisis of the late 1980s which cost the US government (and YOU*, the taxpayer) $32B a year for 30 years, followed by the much larger bailout of the financial services industry in 2009? Remember “too big to fail”? Huge banks and other financial companies nearly wrecked our economy in offering subprime mortgages and other flawed instruments, and were happy to take the profit when it was coming in. While the capitalist principle is supposed to be that their profits are justified by the risks they take, it turns out that they took the profit but eschewed the risk. When it all collapsed, and threatened to collapse the entire economy, they were bailed out by the federal government to the tune of, ostensibly, $700B, but as Forbes columnist Mike Collins reported, this was the tip of the iceberg, with a total cost of over $16 TRILLION!!! To the BANKS, which were, by the way, thrilled to return thereafter to the old way – that is, they make and keep all the money – immediately after being bailed out by YOU*. Just think about the fuss being made about President Biden’s Build Back Better (BBB) proposal, of whether it should be $3.5T or $1T over 10 years (or nothing!) and keep that $16T+ we GAVE to the wealthiest banks in the US in mind! So, the subsidization of pharmaceutical companies like Moderna and others is right in the tradition of YOU* taking all the risk while big corporations make all the profit.

The final issue is that these big corporations often pay little or no tax, as a result of having the money to pay scads of accountants who are adept at finding the loopholes that have been written into the tax laws by a Congress often dependent upon contributions from these same corporations (which would often be illegal corruption at the state or local level but is legal for Congress). Using tax havens abroad, incorporating elsewhere, stashing money in Ireland and the Caymans and other countries may be beyond what you can do, but you do have an important role to play: bankrolling it! Thus my * on YOU* several times above; especially if you are employed and have your federal income tax withheld and thus are paying your taxes, you are funding all this while these corporations – and the billionaires who pay little or nothing, and even less thanks to the $1T Trump tax cut for them – are getting a free ride. No, more than a free ride, they get to charge you – and charge you a lot – for the ride that they are taking!

The sad part – well, it is all sad – is that the YOU* includes lots of minimum wage workers, lots of people who are members of marginalized minority groups, lots of folks just squeaking by (or not), lots of folks who cannot afford and do not have health insurance, and cannot pay for the drugs they need, who are paying the taxes that support the drug companies and the banks. Yes, the fallacy of the common good (see this interesting analysis which identifies the fallacy in the tragedy of the commons) means that there are many regular people who wish they were not paying, or paying so much, in taxes despite the fact that they are happy to benefit from and think they are entitled to benefit from publicly funded (ie, tax-funded) things like roads, fire and police protection, national defense, Social Security, etc. This is short-sighted and wrong, but most of us just get to grouse and still pay.

But not the corporations, banks, pharmaceutical companies. The COVID-19 vaccine patent controversy, while very important, has implications far beyond the immediate issue.

Posted by Josh Freeman at 8:58 AM No comments: