COVID, Vaccine, Racism, and Masks: Changing for better or for worse?

We are not yet out of the COVID pandemic. Not in the world, where hot spots linked to both bad luck and irresponsible arrogant governments continue to rage in such places as Brazil and India, as well as in some countries in Europe and in other parts of the world. Not in the US, despite the CDC indicating that it is now ok for those who are vaccinated to stop wearing masks. People are still dying in large numbers, people are still being infected, and this map of the US does not show all light-colored, low-risk counties (the gray counties, and state of Alabama, have to do with nonreporting). 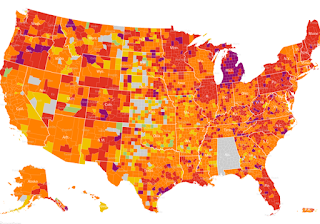 But things are getting better. We no longer have an ignorant, evildoer in the White House who is intent on ensuring that as many Americans die as possible (while he himself got every a

vailable treatment when he was sick, and indeed got vaccinated), but there are still plenty of Americans who are loyal and faithful to him (or to the myth of him), and to the wacko conspiracy theorists on the dark part of the web. Many of these folks are vaccine-hesitant or vaccine-resistant.

A lot of the coverage of these attitudes has been in minority, and particularly Black, communities. There is definitely resistance there, and to a large degree it is based on the experiences of those communities with the health care system. Some of this may be, in fact, the oft-cited historical examples of exploitation and experimentation on Black people in this racist nation. These include (probably most famous) the Tuskegee study of the “natural history” of syphilis in Black men that continued even after a cure (penicillin) was discovered; they were not treated. They also include the work of the “father of gynecology”, Dr. J. Marian Sims, whose discoveries were based on non-consented (of course) surgery on Black slave women, for a foretaste of Nazi doctors. They include, more recently, the fact that the HeLa cell line, derived from a cancer in a Black woman, Henrietta Lacks, has been basis of many discoveries to treat cancer, but she was not cured and neither she or her family received recognition (or money, despite much going to researchers) for it.

Many Black Americans know these stories, and it is probably true that, to some degree, they influence the reluctance of some people to put their fates in the hand of the healthcare system and to trust the government, including the CDC. But I would posit that a larger reason is not these near-mythical (although very real) abuses, but the more mundane, everyday abuses that people, especially poor and minority people, have experienced at the hands of that system. It is no fun to be sick, no pleasure to need treatment, and the arrogance of much of our health-system culture to its patients is very often confusing, frustrating, unpleasant, and demeaning to even well-insured and well-to-do White people. How much greater are all of these indignities – and too often abuses – if you are not insured or poorly-insured? If the massive health care institutions that have been built in pursuit of profit do not really want to care for you, or offer you their special magic bullets available to those with more money? How much greater than even that is it when you are Black, and endure the overwhelming manifestations of American structural racism as delivered by the healthcare system? When the presumption is you are more likely to be the cause of your own problems, because of your behaviors, or your self-abuse, when the presumption is that you are guilty of not-always-clearly-stated malfeasances, that you are stupid and ignorant and not to be trusted?

Sure, Tuskegee and Sims and HeLa came from the same racism, but you don’t need to even know about them at all to know that the health system is stacked against your, and your family, and your friends, and your community, and not always to be trusted. So maybe you’re not sure about getting that vaccine. And many Black Americans, and other minorities are not sure. But they aren’t the majority of the “vaccine skeptical”, despite getting more attention. The “traditional” anti-vax community is largely White, educated, upper-income and centered on the coasts, especially the West Coast. It is represented by a legion of celebrities and other famous people, including Robert Kennedy, Jr., Jennie McCarthy, Mayim Bialik, even (until recently) Oprah Winfrey. In the COVID pandemic, they have been joined by another much larger cohort, overall less educated and wealthy but just as White – the Trumpers. Following the incorrect and dangerous information that continues to spew from their leader, they now believe that the vaccine is ineffective, probably bad for you, and likely a result of a conspiracy of foreigners. You can look into the Dark Web, or QAnon to find this information, or just turn your dial to FoxNews. And while there are organized efforts by Black leaders, including celebrities, to urge folks to receive the vaccine, there is no comparable campaign among by the heroes of the White right.

Many articles have appeared documenting the degree to which our emergence from the COVID shutdown is going to depend upon adequate numbers of people receiving the immunizations. Health authorities, nationally and in state after state, have dropped the age criteria for being immunized, so that at this point in many jurisdictions, only infants are ineligible. And folks are still being immunized; while the rate of immunization has decreased from the peak, it is still being actively pursued by many people. But what is scary is that there are so many who will not receive it. And they won’t wear signs.

Were you worried about a third wave of COVID? Or is it now fourth? I forget. Anyway, good idea to worry. The CDC has indicated that those people who are fully vaccinated can now not wear masks in public. There is actually good scientific evidence for this, and it would certainly help people to feel like a corner has been turned. Except – they won’t wear signs. As reported by the Associated Press on May 15, 2021, while many small businesses are embracing the new opening and taking down their signs requiring masks, not wanting to “have to play police” any more, many large chains are continuing their mask policies.

‘As many business owners pointed out, there is no easy way to determine who has been vaccinated and who hasn't.’

‘And the new guidelines, issued Thursday by the Centers for Disease Control and Prevention, essentially work on the honor system, leaving it up to people to do the right thing.’

Right. The honor system. The folks who stormed the US Capitol, who stood with guns outside the Michigan State Capitol to oppose masking (in the state which now has the highest COVID rates in the US), who believe that COVID is a hoax, that Trump won the election, that Nancy Pelosi is the devil, and that Jews have space lasers, will be honorable enough to wear masks when they haven’t been vaccinated. 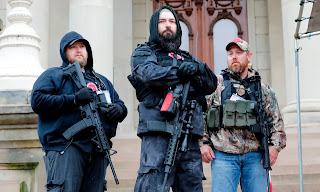 Good luck with that.

Posted by Josh Freeman at 7:52 AM No comments: