Who is gaming the system? Surprise, it's the corporations!

* Citations from that blog post: “RAND Health Insurance Experiment (as cited in Freedom abroad, health at home: experiments in preventive health care, February 13, 2011; the study was published in the New England Journal of Medicine in 1983[1]; and it is summarized in an article by Joseph P. Newhouse, "Free for all?:  lessons from the RAND Health Insurance Experiment", RAND 1993.”
Posted by Josh Freeman at 6:54 AM 3 comments:

Life expectancy, socialism, and the determinants of health

“Socialism,” writes Washington Post columnist Kathleen Parker on February 9, “has always appealed to the young, the cure for which isn’t age but responsibility. This usually comes in the form of taxes and children, both of which involve working and sacrificing for the benefit of others, the extent of which forms the axis upon which all politics turns.” Parker is discussing the brouhaha around comments about the need for women to support Hillary Clinton’s presidential bid, particularly those by Gloria Steinem that young women are supporting Bernie Sanders because, essentially, that’s where the boys are. Her logic seems a little contradictory to me, because socialism is all about being part of a society that we are all in together, where we work and sometimes sacrifice for the benefit of others.

Parker really means that we become more selfish, that the “others” narrows from our whole society to that small group, presumably our nuclear family, for whom we work and sacrifice. Of course, she is only talking about some people. Some people never have children. Others of us realize that there are benefits that we all want as a society – transportation and police and schools and even a social safety net – that makes us more than willing to pay our taxes. And a few people, very wealthy, accumulate much more money than they or their children could ever use and pay very little in taxes. They, to be sure, are big fans of the popular narrative endorsed by Parker: that the rest of us need to buckle down and take care of our kids and not make a fuss and be socialist and threaten their gravy train. And for sure keep paying taxes, so that when they need to be bailed out the government has the funds.

It is a deeply flawed narrative, but it holds a lot of sway, and is used to justify policies that have facilitated the greatest transfer of wealth, from most of us to a few of them, in a century. More and more Americans are on a treadmill, working harder and harder to discharge their responsibilities to their families and pay their taxes, because their real wages are stagnant or decreasing. Our economy increasingly is one where little is manufactured but we all tithe to the kitty (or is it a lion?) of the financial services sector; its “players” compete for that money taken from the rest of us (anyone seen “The Big Short”?) and it bothers them not one bit. That it bothers a lot of young people enough to support Senator Sanders (who Parker says “never outgrew his own socialist-rebellious tendencies”) should make all of us happy and optimistic, since what is happening now is not good for most individuals, their families, America, or the world. 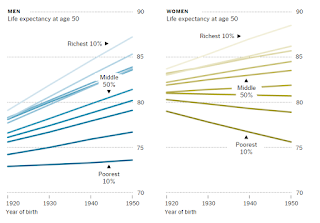 It’s also not good for a lot of people’s health. The New York Times’ Sabrina Tavernise reports on February 12, 2016 that the “Disparity in Life Spans of the Rich and the Poor Is Growing”. “Experts have long known that rich people generally live longer than poor people,” she begins, but how much longer is increasing. This was most recently demonstrated by a study conducted for the Brookings Institute by Barry Bosworth, Gary Burtless, and Kan Zhang (“What growing life expectancy gaps mean for the promise of Social Security”). Men in the bottom 10% of income born in 1920 lived 6 years less than those in the top 10%; for those born in 1950 it will be 14 years. For women the increase is as great, from 4.7 to 13 years, and for women in the bottom 30%, life expectancy has actually decreased. This is not a good trend, and it is not limited to the outliers in the top and bottom deciles. As illustrated by the accompanying graph, the more you make the longer you can expect to live. Tavernise makes clear that this is despite the advances that have occurred in medicine and technology; indeed those have relatively little impact upon longevity or health, despite the amount that we as a society spend upon them; most estimates of the contribution of all medical care to health status are in the 10-15% range. This is, nonetheless, where most of our health expenditures (now over 17% of GDP) are, and of course to the extent that they are of benefit to individuals they are far more available to those who have more money. Per Tavernise: “The Social Security Administration found, for example, that life expectancy for the wealthiest American men at age 60 was just below the rates in Iceland and Japan, two countries where people live the longest. Americans in the bottom quarter of the wage scale, however, ranked much further down — one notch above Poland and the Czech Republic.”

The Times article quotes the usual sources to tell us that lower income people are likely to have more negative health behaviors, like smoking and prescription opioid use (but, somewhat surprisingly, not that much more obesity – 37% in the lowest and 31% in the highest income group). Health behaviors are important; they may be as significant as medical care in determining our health. So is biology, our individual genetics. But even smoking only accounted for a fifth to a third of the difference.

The real causes of the difference in life expectancy are the “social determinants of health” (SDH). These include having a place to live, having enough to eat, having warmth in the winter, living in a neighborhood with lower rates of both interpersonal (muggings, homicide) and institutional (environmental pollution, lack of access to basic resources like stores, transportation, sidewalks) violence. They also include the occupational risks accompanying many lower-income jobs that involve physical labor and the toll it takes on the body (and increase the probability of living with chronic pain and using opioids). The SDH are tied to other risk behaviors, such as smoking. And, since socioeconomic status is highly correlated with that of one’s family of origin, people with higher incomes were likely to be born and raised in families with higher incomes, which confers a lifelong health benefit. Of course, this negative impact of SDH would be expected to be greatest in the lowest socioeconomic groups, which it is, but above them surely people have those basic needs met? Why are they living less long than the really rich?

A big part of the reason is misperception by the well-off, which includes most policymakers, politicians, pundits, and even journalists of how much money people make, and thus how many people are well-off. The median household income in 2014 (US Census Bureau report) was about $53,000. Half the households made less, and half more. The bottom 80% of income earners account for about 50% of all income, with the top 20% having the other 50% and the top 5% over 20%.  An individual with an income of $100,000 is in the top decile on that table, and so it is less surprising that folks making less have some deficit in their health and life expectancy.

From the Times article: “At the heart of the disparity, said Elizabeth H. Bradley, a professor of public health at Yale, are economic and social inequities, ‘and those are things that high-tech medicine cannot fix.’”. I have cited Bradley before (To improve health the US must spend more on social services, December 18, 2011), and her point, that in the US we spend far more on medical care than other social services, is still right on. We spend huge amounts on high-tech and variably effective care that benefits a relatively small number of people (and, disproportionately, those with higher income) and much less than other OECD nations on other social services that actually improve health and life expectancy. Oh, but those countries spending that money are those “social democracies” that Bernie Sanders goes on about. You know, socialist. The ones where people are healthier and live longer.

Now, why would we expect, or want, our young people to “grow out” of the idea that this is a good thing?