One thing to NOT worry about: paying for health care -- in France

.
I recently saw the film Le Havre, a film set in that French city and made, in French, by Finnish director Aki Kaurismäki. It was a very good film, generally well-reviewed (here is the New York Times review), and part of its appeal for me is its unabashed portrayal of working-class people as the central characters. One of the plots involves the illness of the female lead, Arletty, who suffers severe abdominal pain, is brought to the hospital, and is told that it will be terminal (although, the doctor observes, “miracles do happen”.) I don’t need to share any more of the plot, because what I found striking was really incidental to it.
Kaurismäki goes to some length to depict both the poverty and dignity of his characters. It is an imaginable working class poverty -- this is not the Mumbai of Slumdog Millionaire – but it is certainly poverty. Arletty’s husband is a shoeshine man; they live on an alley off a small street in a house that evokes the apartment of Ralph and Alice Kramden on The Honeymooners. When he sees his wife in such pain, her husband’s main concern is how he will get her to the hospital. He goes to the street to ask a shopkeeper if he can use her phone (they don’t have one), and she offers to drive them. 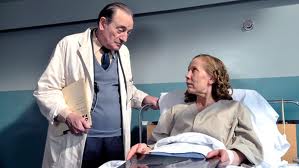 What is not a concern is whether they can afford her medical care. As I am used to being in the US, to caring for people of limited means, of seeing people in the free clinic who cannot afford to go to the doctor or people admitted to the hospital when they finally show up in the emergency room with disease that is far gone because they haven’t sought care, I found this a bit jarring. I was waiting for Arletty to protest that it was “nothing” (she has been in some denial already), for fear that they couldn’t afford medical care. But she doesn’t, and he says nothing about it, and goes off to find transportation. We could see the same thing in an American movie, and we would expect the same thing in our own lives – when your wife is really sick, you take her to the hospital, you worry about the bills later.
Except that wasn’t why. They weren’t worried about the bills. Because it was France. With a national health insurance system, where everyone, even the wife of a self-employed shoeshine guy living in a tiny house off an alley, has health coverage. In the film, Arletty is in the hospital for several weeks, but of all the issues that occur, how the couple will pay for it never comes up. Not at all. It is not even a thought in their minds. But it is a thought in mine, and I keep having to remind myself that it is not part of the plot because it is not an issue that French people have to concern themselves with. The illness, yes. Whether she will survive, yes. Whether he will earn enough money each day to buy dinner, yes. But not how to pay for several weeks of hospitalization. Amazing.
There was another aspect of the healthcare portrayed in the film that struck me. The hospital was simple and unostentatious. It looked a little dated, old-fashioned, like the houses and the shops and the working-class lives of the characters, even though the film and its theme are contemporary. Maybe this is also something about France. The hospital is clean, freshly-painted, with clean linen, and private rooms, and IV poles and doctors and nurses. But it is simple. The ceilings are not high, there is not expensive art on the walls, or carpets, or hallways twice as wide as they need to be. It is functional. It is not third-world, but it is basic. It is pretty unlike my hospital, or most of the hospitals that we see in the US (except some of the oldest public institutions). If someone with private health insurance saw this hospital in, say, Kansas City, they would be unimpressed. They might rather, next time, seek one that was “nicer”. Fancier. With really good hotel accommodations. This is what we look for in the US, what we expect. Surely this is what they lose in such national-health-insurance countries as France.
I checked this with a friend, who is from Canada. He said that this is the way hospitals in Canada are; clean, and functional, but not fancy. He told me he was shocked when his wife had a baby in Kansas City and there were hardwood floors. What for, he wondered? Of course, we know what they are for. They are to help to provide a competitive advantage, to make people choose one hospital over another. For the same reason that hospitals buy new MRI scanners when the hospital down the street has one that is underutilized. Why they have fundraisers to be able to support their cancer center, to attract people with cancer (and, of course, insurance!) to them, rather than to the perfectly good cancer center across town. Why, as depicted in a recent New York Times “Opinionator” by Ezekiel Emanuel and Stephen D. Pearson (“It costs more, but is it worth more?”), hospitals such as Mayo Clinic are building their own billion-dollar proton-beam accelerators to treat cancer when there are more than enough in the country to treat the relatively small number of people who require this kind of cancer therapy.
Because, in the US, healthcare provision functions much more as a business than as a social good. The “product” is healthcare for people, but the product is only of value when it can be sold to those who can pay. We have hospitals that compete for some of our people, while there are others who can barely get care. This competition model can work, just as it works for other products – vendors compete for those who can afford it and ignore those who cannot. If we want healthcare to be an industry, a business, rather than health care.
Le Havre is a very good film, and it does not shy away from social issues. In fact, it addresses many of them. But access to health care is not one, it is not Sicko! The themes I discuss here are just in the background of the film,and I imagine they are not even noticed by French audiences. Or Finnish ones. Being able to afford medical care is not an issue in those places.
Which is as it should be.
Posted by Josh Freeman at 7:04 AM No comments:

It’s definitely not about the bike – but is it even about ACOs?

Cui bono? Is healthcare financing about funding providers or caring for patients?

I would like to call your attention to a superb post on "Zocalo Public Square" by Dr. Ken Murray, "How Doctors Die." It addresses what doctors want for themselves when they are dying, which is generally much LESS intervention.

I would suggest that if patients knew that doctors felt this way, rather than that we were trying to "deny" something to them or their relatives, it might be much more effective.
Posted by Josh Freeman at 8:22 AM No comments: