Not Getting What We Pay For

The Washington Post on Sunday, November 30, covered the issue of the amount of money that the US spends on health care – far more than any other country, nearly twice per capita of #2 – and the poor health outcomes that we get from it. The article notes that:
“The United States today devotes 16 percent of its gross domestic product to medical care, more per capita than any other nation in the world. Yet numerous measures indicate the country lags in overall health: It ranks 29th in infant mortality, 48th in life expectancy and 19th out of 19 industrialized nations in preventable deaths.”

This is not news – health policy experts, scholars such as those from the Dartmouth Atlas project among many others, organizations such as Physicians for a National Health Program, labor unions, churches, and consumer groups have been citing these statistics for many years. In addition to the more horrifying statistic – that 49 million Americans are uninsured, and probably another 30 million have significantly inadequate insurance. These data have been around for a long time, and are getting worse. The Commonwealth Foundation, in its 2008 report issued in July, found that the US health system scored only 65 out o 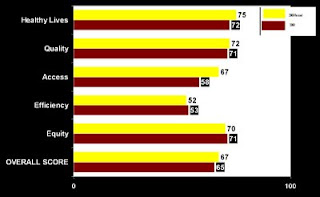 What is perhaps news is that the Washington Post and other mainstream media outlets are beginning to cover it seriously. Beginning to have found enough friends and relatives in their own neighborhoods and workplaces who are suffering to realize that it is not just a problem for “them”. Beginning to recognize that the Cassandras on the “fringe” have in fact been exactly correct; we spend too much, we cover too few people and we have poor health outcomes. We do not, in fact, have the best health system in the world. Very far from it.

We may provide the best health care for certain problems that require expensive technology (and “require” is different from “commonly used”, as the article point out.)
But only to those with coverage. Good coverage. Not everyone. And those same people with very good coverage may be getting BAD care because of the perverse incentive that doctors, hospitals, and other health providers are paid for doing more, not keeping you healthy.

The Post article continues with a quote from Peter Orszag, head of the Congressional Budget Office, who was nominated last week to be director of the Office of Management and Budget in the Obama administration. “Even if only a third of that could be invested in critical programs, imagine the possibilities. Given the scale of it, I am puzzled as to why we are not doing more to improve the efficiency of the health system."

Note that “efficiency” is the lowest score that the US received in the 2008 Commonwealth Fund report. Efficiency scores were low because of poor performance on measures of avoidable hospitalizations; inappropriate, wasteful or fragmented care; variation in quality and costs; administrative costs; and information systems. Arguably, these are the areas which are most responsive to a strong primary care infrastructure (see a future blog entry). 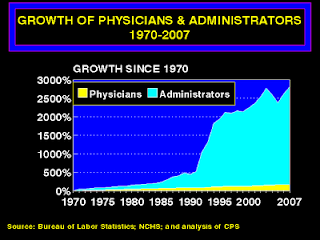 As can be seen by the attached chart, however, it is clear that the problem isn’t that we don’t have enough administrators. Perhaps the answer is more along the lines of “corporate – especially insurance company – profit”.
Posted by Josh Freeman at 6:11 PM