Poverty, Primary Care and the Cost of Medical Care

On January 27, 2010 (Health is more than Medical Care) I discussed how the concept in the title of that piece is true. A society that does not provide for the basic needs of its citizens, such as the US, is going to have more sick poor people who end up requiring more health care services at much greater cost. The greater the income disparity in a country, the greater the negative impact of poor population health. Countries that have a national health system can mitigate some of these effects by, at least, providing access to care for those who, through the various negative effects of poverty, suffer the worst health, but they do not prevent it.

This point is illustrated in the latest (of many, over the years and decades) reports on health status in the United Kingdom, commissioned by the government and done by a panel headed by Sir Michael Marmot of the University College – London. The report, “Fair Society, Healthy Lives”, documents the cost to the National Health Service of the ill health of the poor. This is not, of course, news; Marmot’s famous Whitehall studies demonstrate that there is a more or less linear correlation between health (including longevity) and increasing social class; it shows that the problems have not been resolved. In countries with less disparity of wealth and income (class) than the UK, including most of Scandinavia, these disparities in health are less; in the US, where the disparities in wealth and income are greater, so are the disparities in health and their associated cost.

Since, in the US, poor people are more likely to be uninsured (or have Medicare, if they are over 65), their health care costs are largely borne by the public sector. In this sense, the costs of Medicare can, and have, been used as markers for the overall cost of medical care. This assumption has a great deal of validity, because Medicare recipients, the “aged, blind, and disabled”, are highly overrepresented in both the middle and high use segments of the population (see Red, Blue, and Purple: The Math of Health Care Spending, October 20, 2009). (It is, however, important to remember that the majority of the 5% of “highest cost” users are not seniors – they include NICU babies, multiple trauma victims, and cancer patients.) The publications of the Dartmouth Atlas of Health Care have demonstrated much geographic variation in cost, and these have been used by a large number of health economist and scholars, as well as the Obama administration, to suggest that a great deal of health spending could be avoided if the “high cost” regions utilized health resources at the same rate as the lower cost areas.

Not everyone agrees with the Dartmouth analysis. Probably their most prominent critic is Dr. Richard Cooper of the University of Pennsylvania’s Wharton School, whose positions I have previously discussed on several occasions (most recently January 7, 2010, Primary Care and Residency Expansion). On his blog, Physicians and Health Care Reform, and in venues such as the on-line public health discussion group “Spirit of 1848”, Dr. Cooper argues that it is poverty rather than “inappropriate” use of health services that drive the differences in Medicare spending in different regions. He illustrates this by maps showing the far greater density of poverty in “high cost” Los Angeles, Miami, and Birmingham, AL compared to “low cost” Rochester, MN, Grand Junction, CO, and Portland, OR.

Many others disagree with Dr. Cooper, not in the sense that they feel that poverty is not a (or the) major determinant of health status, but with his assertion that the cost variations the Dartmouth Atlas identifies are solely an artifact based on prevalence of poverty. Among the most prominent of these critics is Dr. Barbara Starfield, of the Johns Hopkins University, a major health services researcher whom I have also often cited. I believe that Cooper’s argument that the Upper Midwest is richer, and thus healthier, than the Southeast is relying on areas that are too large. His contrasts of the cities above in terms of their concentrations of poverty are accurate, but the argument misses the tremendous difference (cited by Dr. Atul Gawande in his piece “The Cost Conundrum” and its followup “The Cost Conundrum Redux” in the New Yorker) between cities such as McAllen and El Paso, TX. Or, for that matter, between Los Angeles and San Francisco, or Chicago, all of which have varying levels of health costs (i.e., Medicare spending).

The real issue is “what is the implication of either position, or any other, for what to do to address the health needs, and cost of medical care, for the US population?” From much of his previous writing, Dr. Cooper has disparaged the contribution of primary care prevalence to the quality of health care, seeing it as a confounder to the true cause of higher spending, because it is more prevalent in the Upper Midwest than in the high cost areas. The data, from many, many studies in many, many countries, not only those by Starfield and the Dartmouth folks, is that it is not a confounder. Where health systems are built on primary care costs are lower and, more important, quality is higher. This should not be a surprise to anyone who is concerned about the impact of poverty on health status – when poor people can access preventive services and treatment at an earlier stage, where intervention is both less costly and more effective, they will have better health status. Primary care reduces cost.

Hospitals and many subspecialist physicians are not happy about the potential for cuts in Medicare because they already think that Medicare spends too little. That is, it does not pay “enough” for the extraordinarily costly high-tech interventions that they make their profit on. I suggest that Medicare spends too much on this kind of care, rather than paying a lot more for the preventive and primary care services that would make this kind of tertiary intervention necessary less often. Medicare should not simply make revisions to its payment schedule, it should completely turn it on its head so that a day of managing multiple complex medical and social problems and doing preventive care by a primary care doctor generates more money than a day of doing procedures such as endoscopies, catheterizations, and the like. (Note that I am not suggesting we invert the incomes, just the amount that these doctors earn relative to each other; the net cost should be dramatically reduced.)

This would, of course, encourage more medical students to enter primary care, which would be a good thing for the health of us all. Simply increasing the number of funded-by-Medicare residency positions will not do that, but rather would just generate more hoping-for-high-income sub- and sub-subspecialists, whose overall effect on health status is, from a population perspective, small. (For example, I benefit, for sure, if my brain tumor is excised or my cerebral bleed drained, and I definitely want access to its benefit, for me and you and the poor; however, if there were no neurosurgery at all, the impact on the health status of populations would be minimal.)

More important, it would free up a lot more money for addressing the overall social problems of poverty, while now the cost of medical care, exceeding 17.3% of the GDP (CMS report by Truffer CJ, et al, in Health Affairs, February 4, 2010) threatens to choke off any other social spending. As articulately stated by Bob Phillips of the Graham Center (personal communication), giving the “…poor the same access to excess that all of the rest of us have in order to lift them from disparity would only hurt them more. Economically, health care is starving the services that do help reduce disparities--education, social services, day care, Head Start, food stamps, etc. They are all suffering right now in state budgets because healthcare is devouring state budgets (health care consumed 1/3rd of all f 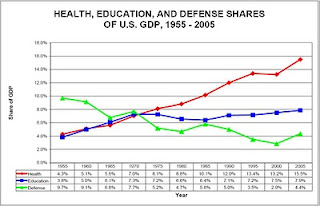 ed/state tax dollar s in 2008,[1] (and probably more now that tax revenue is down)”. This is demonstrated by the 2005 study by Boston University’s Sager and Socolar[2] and shown in the attached graphic, from the Graham Center’s presentation on the topic. Obviously, there would still need to be a decision by our society to spend the savings on social services (rather than, say, tax rebates to the wealthiest Americans, or war), but, other than war, there is hardly a less useful way to improve the health status of the poor than by spending it on more high cost tertiary and quarternary care medical centers staffed by more and more sub-sub-specialists.