.
At the recent American Academy of Family Physicians (AAFP) sponsored National Conference of Family Medicine Residents and Students (NCFMRS) held in Kansas City (hey, it can be an advantage to live in the Capital of Family Medicine!), I had the pleasure of hearing Dr. Steven Woolf’s presentation “Health Disparities and the Role of the Family Physician”. I have previously cited (eg, Economics and Disease Prevention, February 13, 2009) the work of Dr. Woolf, a professor in the Department of Family Medicine at the Virginia Commonwealth University (VCU) College of Medicine. He is one of the most distinguished health services researchers in the country, and a clear and articulate speaker.

His presentation, appropriately for residents and students, began with a description of the role of the family physician in the care of both individual patients and the communities in which they practice. He noted the major health toll exacted by “personal health behaviors”, headed by tobacco (accounting for 400,000 deaths per year) and including diet/activity (300,000), alcohol (100,000), microbial agents (90,000), toxic agents (60,000), firearms (35,000), sexual behaviors (30,000), motor vehicles (25,000), and illicit use of drugs (20,000, presumably not counting licit use of prescribed drugs). Note that, of these, only microbes are in the usual “traditional” area of medicine. His point was that to truly improve health the practitioner needs to go outside the hospital or office to the community, where these causes of ill health are located. “Health in All” policies include transportation, land use, built environment, taxes, housing, agriculture, environmental justice, etc. As an example he notes that 2.3 million (2.2%) of continental US households are more than a mile from a supermarket and do not have access to a vehicle. While Russell Shorto’s “Opinionator” piece in the NY Times July 31, 2011, “The Dutch way: bicycles and fresh bread” points out that one advantage of using bicycles as much as the Dutch do is that you can’t carry more than a day’s worth of groceries so that the bread can be fresh and preservative-free, this is not the way of things in the US; poor access to healthful food is a big contributor to poor health. 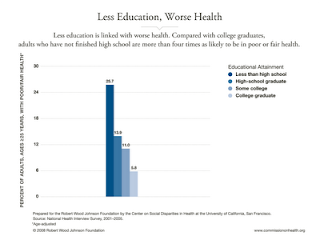 Woolf then went on to demonstrate the familiar (but maybe not to residents and students) data on the remarkable health disparities that exist in the US, particularly by race, socioeconomic status, and educational level (although also by geography, language, and other characteristics). For example, the attached table shows a 24-29% disparity between the age-adjusted mortality rates of white and black males over the period from 1991-2000. The other table shows that the health status of college graduates is much better than that of people with some college, which in turn is much better than HS graduates who have been health than those who have not graduated from HS. These disparities are truly remarkable and should be intolerable. Woolf notes that while most of our current research is focused on finding treatments that are effective, we would save far more lives if we were to focus, instead, on equity by eliminating the health disparities gap. 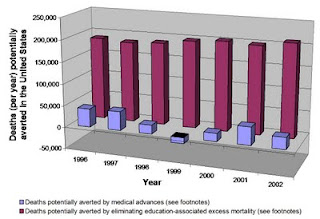 In a “thought experiment” that he published with colleagues in the American Journal of Public Health in 2007, “Giving everyone the health of the educated: an examination of whether social change would save more lives than medical advances”[1], Woolf demonstrates that even if we attribute all reduction in mortality over to medical advances (nowhere near true; most are due to the types of societal change generally characterized as “public health”, such as clean water, sanitation, and cleaner air), eliminating the disparities that exist on the basis of educational level would dwarf that change, as shown in this table.
But our society spends virtually all of its research dollars on developing new treatments that then are available to only a portion of our population, and have relatively little effect even on those who receive it. Big PhARMA spends $32 Billion/yr. While the National Institutes of Health (NIH), which is part of the Department of Health and Human Services (HHS), spends $28 Billion/yr, primarily on developing new treatments, HHS’ Agency for Health Quality and Research (AHRQ), which looks at systems and utilization, receives only $300 million/yr.
Woolf and colleagues have also developed a great new tool for visually looking at the impact of disparities on health on a state and county level. Called the “County Health Calculator” (http://chc.humanneeds.vcu.edu), it allows you to pick a state or a county and compare its income level and educational level to that of the entire country (for states) or the entire state (for counties), or one state or county to another. It also presents the “best” and “worst” levels (for state or county), and allows (this is really neat!) you to use a “slider” to move the indicator to find out how changing the educational or income levels up or down would affect mortality. That is, you can see how many more lives would be saved – or lost – if your state (or county) had the income or educational levels of the average, best, or worst state (or county).
The results are truly amazing.  In Kansas, for example, the two suburban Kansas City area counties are almost polar opposites. Johnson County has the highest level of education, measured as % of adults with at least some college, at 78%, and income, measured as % of adults in households that have a “basic income” (defined as at least 2x the poverty level), 86%. Wyandotte County is near the bottom, with a “some college” education level of 39% and a “basic income” level of 56%. (Statewide levels in Kansas are 58% for education and 70% for income.) Using the slider, we discover that if Wyandotte County’s basic income level of 56% were raised to Johnson County’s 86%, 201 or 28% of deaths would be averted per year. If the “some college” education level were to go from the actual 39% to Johnson County’s 78%, it would result in a reduction of 272, or 38%, in the annual death rate!
No drug comes close to this. No treatment of any kind comes close to this. If a new drug were shown to reduce mortality from a disease by 5%, or even 1%, it would get incredible advertising – hundreds of millions of dollars – and huge publicity, in both the scientific and lay press. But the simple fact that so many more deaths could be prevented, so many lives could be improved, by addressing the social determinants of health, is scarcely covered, and hardly funded at all. 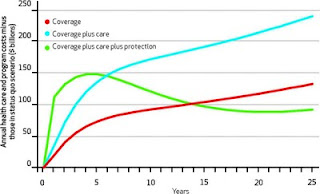 We are in thrall to, primarily, the pursuit of corporate profit, but also to a “scientific” perspective that sees new discoveries as the true goal of research rather than “moving the bar” and changing the actual outcomes for actual people. Eliminating health disparities, which improve health and decrease the death rate, will also “bend the cost curve” in ways that only improving access will not. In one of his slides, Woolf presents data from Milstein, et al, in a 2011 Health Affairs article [2] demonstrating that over the next 25 years neither providing coverage nor coverage + access to care, but only both plus “protection” – addressing behavioral and environmental risks – will do so.
There is no contest to the value of a dollar spent on changing social conditions as opposed to finding “more effective” treatments.  There is also no contest in where we actually spend our money. There is something rotten in the state, and it isn’t the state of Denmark.
[1] Woolf S., et al., “Giving everyone the health of the educated: an examination of whether social change would save more lives than medical advances”, Am J Public Health. 2007;97:679–683
[2] Milstein B et al., “Why behavioral and environmental interventions are needed to improve health at lower cost”, Health Affairs 2011;30:823-832
Posted by Josh Freeman at 7:07 PM

Seems to me that the message is in the same vein as "The Condition of the Working Class in England" or "Report on the Typhus Epidemic in Upper Silesia." As Virchow said, "This population had no idea that the mental and material impoverishment to which it had been allowed to sink, were largely the cause of its hunger and disease, and that the adverse climatic conditions which contributed to the failure of its crops and to the sickness of its bodies, would not have caused such terrible ravages, if it had been free, educated and well-to-do."