Are primary care physicians fees a major contributor to the high costs of US healthcare? No.

A recent article in Health Affairs by Miriam J. Laugesen of Columbia University and Sherry A. Glied of the Department of Health and Human Services has generated a lot of attention. “Higher Fees Paid To US Physicians Drive Higher Spending For Physician Services Compared to Other Countries”[1] looked at the amount paid to 1) primary care physicians for office visits, and 2) orthopedic surgeons for hip replacements, in the US, and compared them to five other countries (Australia, Canada, France, Germany, and the United Kingdom). The study also looked at overall physician income in those countries, and at a variety of factors that contribute to both. These factors include the mix of public (primarily Medicare in the US) and private insurance and the ratio of what private insurance pays relative to the public payer, cost and extent of medical education, and overhead expenses. They noted the relative income of primary care physicians to orthopedists in the various countries. Their stated reason for this study is that “The differential in spending on physician services is greater than the overall difference in total health spending between the United States and other nations.”
The concept that a significant portion of the US’ extremely high health care costs is due to high physician reimbursement has long been widely accepted, but the assertion that a part of the blame lies with high primary care incomes is rather new, and is the part of this article that has engendered the most attention. Robert Pear’s NY Times piece on September 7, 2011, “Doctor Fees Major Factor in Health Costs, Study Says” and the response letter from the American Medical Association (AMA) addressed the first part (both/all specialities). The second issue, the article’s focus on the fees of primary care physicians generated pushback from the president of the American Academy of Family Physicians (AAFP), Roland Goertz, who issued strong criticism of the implication that it is primary care physicians who account for the high cost of US healthcare (AAFP President Refutes Claims That Primary Care Physician Incomes Contribute to High Health Care Costs.) More basic information on the economic issues and assumptions that inform this kind of work are described quite clearly by Uwe Reinhardt in a Times “Economix” column on September 18, 2011, “The role of prices in health care spending”.
So what does the Laugesen and Glied study really show? It does show that primary care physicians in the US makes more than primary care physicians in the five other countries, and in some cases a good bit more. It also shows that orthopedic surgeons in the US make a lot more than orthopedic surgeons in other countries. These differences are not due primarily to seeing more patients (patients in those other countries have more visits than do primary care physicians than those in the US, averaging 5.95 per capita per year to the US’ 3.8, and orthopedists do not do significantly more procedures) but rather to the higher fees paid by private insurance in the US.
The study also shows, very significantly, and as emphasized by Dr. Goertz, that the ratio between the income of orthopedists and primary care doctors is much higher in the US than in those other countries. This bolsters the argument that, to the extent doctors’ fees contribute to the high cost of health care in the US, it is much more because of specialist rather than primary care, reimbursement.  The authors of the study note that “Most other countries, however, have moved further away from fee-for-service
than the United States has”, and that “Where physicians may charge fees above the national schedule, the practice is consistently more common among orthopedic surgeons than among primary care
physicians, regardless of country.”
A key finding of the study that also supports Goertz’ argument is that [my bold] “Overall, fees paid by Medicare to US physicians for office visits are comparable to those paid by public insurers in several other countries, and fees paid by US private insurers are slightly higher than those paid by private insurers in other countries. In contrast, fees paid by public payers to orthopedic surgeons for hip replacements in the United States are considerably higher than comparable fees for hip replacements in other countries, and fees paid by private insurers in the United States for this service are double the fees paid in the private sector elsewhere .” This is exacerbated by the fact that “In general, Americans are very low users of office visits and relatively high users of hip replacement surgery.”
US orthopedic surgeons earned at least 50% more than those of other countries, and the ratio of primary care to orthopedist income was the lowest in the US, 42%, compared to 60% in other countries. The authors note that “The differences in incomes relative to fees provide more confidence in the overall comparability of the data. They suggest that higher US 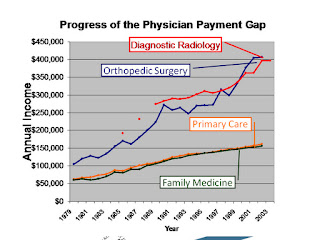 fees are a consequence not only of higher practice expenses, but also of higher rewards for the skill and time of physicians.” The authors also address the greater cost of medical education to the individual in the US, but conclude that the increased reimbursement more than compensates for this difference. Work by the Graham Center (see figure) shows that medical student specialty choice is highly tied to projected income.
One factor not addressed in most of the commentary on this article is that the authors of the study say “In the United States this definition [of primary care] includes family practice, general practice, internal medicine, obstetrics and gynecology, and pediatrics.” They do this despite the fact that “this” refers to the immediately preceding sentence, which presents the 2008 definition from the Organization for Economic Cooperation and Development (OECD) of a “primary care physician as one who does not limit practice to certain disease categories”. This definition certainly does not include obstetrics/gynecology (OB/GYN). Why, then, do they include OB/GYNs? Unsurprisingly, the answer is largely political; the argument in the US was that many women receive their “primary care” from their OB/GYN. This logic, however, is deeply flawed. To the extent that women do so, they are not receiving comprehensive primary care, because OB/GYNs care for conditions involving the reproductive system and women are more than their reproductive tracts. Lest this be seen primarily as a matter of my personal sensitivity as a family physician, there is a very important issue because including them can dramatically skew the income data. As OB/GYNs are largely surgeons, their fees and income are much higher than those of the other specialties that are actually primary care, and raise the measured income of “primary care” physicians when they are included.
Laugesen and Glied show that “US primary care physicians earn about one-third more than do their counterparts elsewhere” but that “…neither public insurance nor private insurance generalist physician fees for basic office visits are much higher in the United States than in many of the comparison countries. Instead, US primary care doctors do somewhat better overall mainly because a much larger share of their incomes is derived from private insurance. In other countries where private primary care practice is permitted, the market share of this form of practice is relatively small.” They go on to say, however, that “For orthopedic surgeons, the story is quite different. US orthopedic surgeons earn much higher incomes than do their counterparts abroad, and there are more such surgeons per capita here than almost anywhere else. In consequence, comparison countries spend only about one-quarter as much as the United States spends on orthopedic surgeons. Rates of hip replacement surgery are not higher in the United States than elsewhere, although rates of other procedures performed by orthopedic surgeons may be. Much of the difference in earnings appears to be due to differential fees. Public-sector fees for hip replacement surgery in other countries are about half as high, on average, as Medicare fees in the United States.”
Finally, the ratio of primary care physicians (essentially all general and family physicians) to specialty physicians in other countries is much higher than in the US, so this is also an area in which their costs are lower. That is, more care is provided by primary care doctors and less by more expensive (even in those countries) specialists. Thus, the problem with health costs in the US is not the high cost of primary care. It is the private for-profit marketplace and the excessive fees paid by private insurance for surgical procedures and other specialty care that drives physicians’ fees to be so much higher in the US.
Among the many other changes that we need in our health system, two important ones are increasing the percent of our physician workforce that is primary care, and creating greater equity in the reimbursement among physicians.
[1] Health Affairs, 30, no.9 (2011):1647-1656