Treatments that don't cure the disease; we are spending money on the wrong things

In “Heralded treatments often fail to live up to their promise” (Kansas City Star, May 17, 2014), Alan Bavley, writing with Scott Canon, continues to demonstrate that he is one of the excellent health journalists – excellent journalists – in the US, along with Elisabeth Rosenthal of the New York Times. The common practice in the news media (and, thanks to a typo, “medica”) is to hype the new, exciting, dramatic, expensive, and hard to believe even though you want to. In politics, we often see the media acting as flaks for the government, the rich, and the powerful (sometimes, of course, these can be in conflict). Bavley and Rosenthal  and their ilk actually do investigative journalism, trying to the best of their ability to find out the truth rather than to reprint press releases.

The article begins with a review of a surgical procedure that was designed to control high blood pressure (hypertension) without drugs, by cutting some of the nerves to the kidneys. It made sense, it was seen as a big breakthrough (“The potential benefit was huge,” said a cardiologist). Unfortunately, when actually subjected to appropriate scientific study, it didn’t work. Or, rather, it worked just as well as placebo, a sham surgical procedure. The same cardiologist remarks ““This could be considered the biggest disappointment in cardiology of this century, but “the medical community went about it right.”

Science worked. Unfortunately, the authors add,
“If only that were always the case. A combination of industry marketing, overly eager doctors, demanding patients and news media ready to cheer on anything that sounds like a breakthrough is popularizing many drugs, surgeries and other treatments long before they’re adequately tested. Far too often, they’re ultimately proved ineffective, no better than older, cheaper therapies, or even hazardous. Billions of dollars are wasted and tens of millions of patients are put at risk”

Yup. They go on to cite the Vioxx scandal, in which Merck concealed evidence of its biggest-selling drug causing an increase in heart disease. But that was taken off the market; many other unproven (or worse, proven to be ineffective) treatments are not. They talk about arthroscopic knee surgery, still often being done for conditions for which it has been shown to be no more effective than a sham procedure. They discuss surgical robots, costing upwards of $1.5 million, and proton-beam radiation treatments (those babies, the machines, really cost a lot!) for which the evidence of effectiveness compared to more standard and much cheaper treatment is mixed, at best. But hey, if you’re a hospital, and the competition has robots and proton-beam accelerators, who’s going to come to you if you don’t have one? Poor people? Heaven forfend!

And it is all about getting the advantage on the competition to make more money. A good argument can, and should, be made that competition in hospitals helps no one. That if there were an expensive item that there were an actual medical need for one of in the community, there should be one, not one at every hospital. But that would presume that the goal of the health system was to increase the health of the American people at the lowest effective cost. It isn’t. It’s to make money. If I can get your patients to come to me instead, it is seen as a victory (from a competitive business sense). It is really a loss for the health of our people and the pocketbooks of us all.

It is particularly depressing because that money is not buying us health. If you still harbored the belief that “we have the best health care system in the world”, it’s time to acknowledge that you are wrong (although we forgive you given the hype!). We should all know how expensive our health care system is, that we spend way more than any of the other developed countries (members of the Organization for Economic Cooperation and Development, OECD). The attached graph, from Steven Woolf, MD, PhD, who was a plenary speaker at the recent Society of Teachers of Family Medicine Annual Conference, shows a comparison of spending and life expectancy for the OECD countries. That’s the US way off to the right, spending more than anyone by far, but having a life expectancy close to the Czech Republic. Better than Mexico, Poland, Slovakia, Hungary and Turkey, but at enormously greater cost! 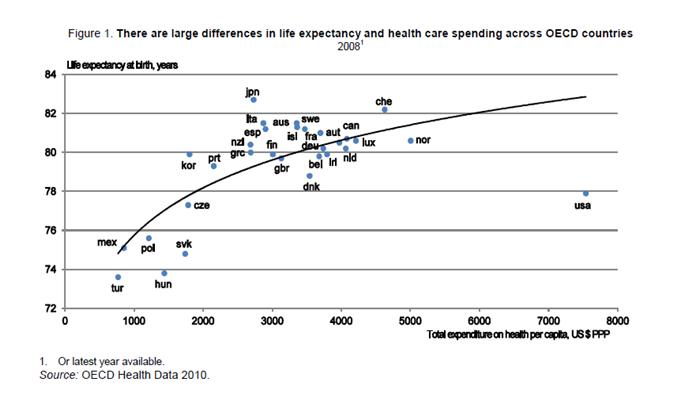 Woolf was the lead author of the Institute of Medicine’s (IOM) recent report “Shorter Lives, Poorer Health” , which presents depressing, but unfortunately accurate, data on our health status. We are among the “leaders” in death rates from communicable and non-communicable diseases and from injuries. Only for a few causes are our death rates better than the average. Our life expectancy at birth is worse than any of the 17 comparison countries for men, and second worst for women. Our probability of survival to age 50 is lower than any of 21 comparison countries. At any age until 75, we are never better than 15 out of 17 in terms of life expectancy. We do have better survival rates once we reach age 75, but there is no information on how much of that is keeping people alive despite poor quality of life.

Want more? In case you think it is only the minority populations (although that would be part of our population), non-Hispanic whites rank no higher than 16 of 17 at any age below 55. And the only portion of our population for whom mortality rates have risen is non-Hispanic whites with less than 12 years of education. From 2005-2009, the US had the highest infant mortality rate of the 17 countries and the 31st highest in the OECD. Non-Hispanic whites and mothers with 16+ years of education also have higher infant mortality rates than those in other countries. Among the 17 peer countries, mortality from transport accidents decreased by 42% in the OECD between 1995 and 2009, but by only 11% in the US. The same trends hold for child and adolescent health – and ill-health and mortality.

And then there are the areas where we really shine, particularly health issues related to guns.

We have the highest child poverty rates in the OECD, our preschool enrollment is below most countries, and the ratio of social services spending to medical spending is below almost all other OECD countries.

This is insanity. We are spending enormous amounts of money, but we are spending it so that our hospitals can compete with each other, so that we can deliver the most expensive and high-tech care whether it benefits people’s health or not, and we then do not have any money left to do the things that would really enhance health: expanding education, creating jobs, decreasing poverty, ensuring that people had homes and enough to eat.

Not to mention the guns.