Our health is going downhill: poor public health and poor attention to the social determinants

“Our health is going downhill” shouts a headline in the Kansas City Star, January 4, 2009. The local take of this article, by Alan Bavley, was the poor performance of Kansas and Missouri, the two states served by the Star, on the 2014 report on America’s Health Rankings, published by the United Health Foundation, the longest-running ranking of public health status in the nation, since 1990. Bavley emphasizes that both states have dropped significantly in those rankings; Kansas was 12th in 1990 and is now 27th; Missouri was 24th in 1990 and is now 36th.

This leads to a lengthy discussion of why both states have dropped, mainly attributed to a lack of investment in public health, and how there is a geographic disparity, with states on the coasts doing overall better than those in the Midwest: “What explains this dramatic difference between the coasts and the Midwest is broad investments on the coasts in things that make communities healthy,” Bavley quotes Patrick Remington of the University of Wisconsin. What this misses, however, is the even worse news that is hidden by “rankings” data. While in rankings of states there will always be a #1 (in this case, Hawaii) and a #50 (you guessed it, Mississippi) this hides the fact that, overall, states have gotten worse over this 25-year period. The graphs in the print edition of the Star (not included in the on-line edition) show the decrease in rankings noted above for the two states over time. However, on the “America’s Health Rankings” website one can not only look at the map showing relative state rankings but also click on each state and see how its absolute health ratings have changed over time. 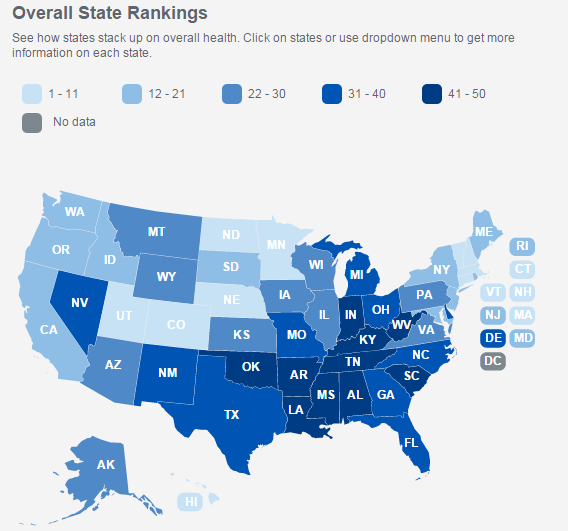 Hawaii, ranked #1 in 2014 (Vermont is ranked #1 for the whole 25-year period), has nonetheless had its health status drop quite dramatically since 1990, while Mississippi, #50, has actually slightly improved. Locally, Kansas’ health status has dropped significantly consistent with its slippage in the rankings, but Missouri’s, after a big dip in the intervening years, is about the same as it was in the mid-1990s, despite its lower ranking. How can this happen? How can Missouri drop 12 places in the rankings despite having about the same health status if the top-ranked states are getting worse? The only explanation is that the gap was even greater in the past, and that some states in the middle, such as Illinois (#30) and Pennsylvania (#28) have gotten better while Missouri has stayed the same. Hawaii has dropped from a rating of +0.7 to +0.3, while Mississippi has gone from -0.4 to -0.3. Dr. Remington’s comments may be accurate, but they were more accurate in 1990, and since then states have seen a race to the middle, if not the bottom, in terms of public health.

The rankings above are the “all outcomes” rankings from the United Health Foundation studies. They are composed of several subcategories. One component lowering these overall outcomes is the obesity rates, which have risen nationally from 11.6% in 1990 to 29.4% in 2014 (!) as well as in every individual state. Diabetes has risen nationally from 4.4% to 9.6%. Physical inactivity has stayed relatively constant, but distressingly high, at nearly 75%. On the other hand, the last measure, smoking, has gone down nationally from 29.5% to 17.6%, but has tended to stay the same over many years more in lower-ranked states, such as Mississippi, Missouri, and even Kansas.  The study ranks senior health separately, but this tracks pretty well with overall health; Hawaii is the best, Kansas is 25, Missouri is 42, and Kentucky replaces Mississippi (#47) as the worst. The study also examines rankings for a variety of other characteristics, some of which are different for the overall population and for seniors. They include chronic drinking (seniors), binge drink (all adults), depression (seniors), etc., as well as societal measures which might impact or “confound” health status including education level, percent of “able bodied” (no disability) adults and percent of children in poverty.

The study also provides us with information on health disparities, obesity levels by different sub-populations, based on education, race/ethnicity, age, gender, urbanicity, and income. Two non-surprises: the South and South Central regions do the worst, and the problem is greater for those with lower education, non-white race/ethnicity, and lower income; urban status and age have less impact. In terms of educational impact on health disparity (the difference between the highest and lowest educated in terms of health status), things change: Hawaii is still #1 but Mississippi is #2, while California is #50! Unfortunately, for many of the states with both low overall health status and low disparity, it means that even the better-educated have poor health status.

So what do we learn? Yes, as Dr. Remington points out, some parts of the country generally do better than others (although identifying these as the Northeast , West, and North Central  regions is more accurate than saying “the coasts”), and the South and South Central regions tend to be worse. Yes, as Mr. Bavley highlights, both Kansas and Missouri have significantly slipped in the relative rankings. But we also see the whole country getting worse, particularly with regard to conditions such as obesity and diabetes. And we see the most dramatic drops in certain states, not only Kansas but Wisconsin (down from +.38 to barely positive at all, +.07). The people interviewed for the Bavley article in Kansas and Missouri, as noted above, cite inadequate, and decreasing, spending on public health as the reason.

It is certainly one of the big reasons, along with a consumer society that encourages consumption of high-calorie, low nutrition foods. And a car-based society that makes exercise a specialty activity, more available to some than others, rather than part of life. And a terrible economy where a shocking number of people don’t have jobs and others have to hold down two or more to make ends meet so have little time for exercise. The other huge reason are those “social determinants of health”; the impact of poverty, racism, poor education, inadequate housing and food. The social structure and social support for the most needy in the US has never been adequate, and is eroding, more in some states than in others, sometimes on purpose (because of political beliefs) and sometimes by a (possibly) more benign neglect.

Some of it is the chronic problem of public health, that its successes are the absence of disease and thus less obvious. It is easier to feel grateful for treatment of a disease we have contracted than, say (as I have often said before) to be grateful each morning that we don’t have cholera because we have clean water. It is, perhaps for some, easier to think we don’t need to vaccinate our children when diseases that the vaccines prevent are no longer in evidence. But it is a fatally flawed analysis. When a good has resulted from doing effective preventive efforts, the solution is to keep up our efforts, whether vaccination or public health.

And cutting back on our social safety net is a good prescription for worse health.
Posted by Josh Freeman at 9:35 AM