This is part one of the Charles Odegaard Lecture, delivered at the 27th National Conference on Primary Health Care Access, April 6, 2016

“The dream of reason did not take power into account”.
--Paul Starr, "The Social Transformation of American Medicine", 1982

In 2008, the British Healthcare Commission began an investigation into conditions at Stafford Hospital, run by the Mid-Staffordshire Health Trust.[1] The investigation was prompted by patient complaints and a higher-than-expected death rate, and it and subsequent[2] investigations uncovered a pattern of both poor quality care and cover-ups by those running the hospital. It became a major national scandal. In 2014, whistleblowers began to reveal the extent of problems in the Phoenix Veterans Administration system, with long delays for appointments, inadequate care, and even excess deaths. The investigation revealed enormous cuts in services, as well as efforts to cover up the problems, similar to those in Stafford. Moreover, it turned out that the problem was far more extensive across the VA than just Phoenix.

These two events are discussed by M. Gregg Bloche in his NEJM Perspective “Scandal as a Sentinel Event — Recognizing Hidden Cost–Quality Trade-offs”[3]. The details of the two scandals differ, as do the health systems of the two countries in which they occurred, but there are disturbing similarities.
“As with the VA scandal,” Bloche writes, talking about Staffordshire, “politicians blamed individual perpetrators and one another, and the prevailing narrative highlighted lapses of character and culture…In both cases, performance standards often proved incompatible with resource constraints….The fakery was discovered, and perpetrators were punished. But the truth that trade-offs between quality and cost were embedded in budget constraints remained submerged.”

So, while more rigorous standards were being set for performance, budgets were being cut. These cuts made it difficult or impossible to meet those standards, and administrators in both systems covered up the problems. They lied about their compliance with the standards -- and, not coincidentally, often got financial bonuses for doing so (or at least got to keep their jobs). In addition to the probably unnecessary deaths, outcomes were more generally poor care for all patients. In the British case, the excess deaths were pretty well documented, as were the stories of patients lying in urine and excrement, inadequate food, and unavailable nursing care. In the US, at the VA, proving excess deaths was more difficult, but excessively long waits, particularly for specialty services, may well have contributed to unnecessary or premature mortality, and falsifications by the administrators were very clear.

In both cases, heads rolled – local administrators, the head of the Mid-Staffordshire NHS Trust, and in the US eventually the head of the VA.  The politicians, in the US Congress and the British Parliament, who had been responsible for the funding cuts in the first place, took no responsibility and indeed used these scandals to act in a self-righteous manner, denouncing “those responsible”, while being clear that this did not include themselves. Nowhere in the discourse in the media are the budget constraints and cutbacks acknowledged as a major cause of the problem.

And, yet, the politicians were surely responsible, because it was the budget cuts that they imposed, along with the potential they built in to these systems for financial gain on the part of those directly tasked with running the operations, that led to these problems, certainly along with the collusion of the people directly in charge. The process has had two steps  – first, we are going to cut your funding and you are going to have to figure out how to cut in a way that doesn’t, at least obviously and in a manner that reflects on us, cut services. Second, we are going to tie rewards – institutional and personal (direct financial bonuses, or at least keeping your jobs) – to the degree that you can cut costs. We are also going, to a greater or lesser degree, “privatize” operations on the assumption that this will, with the motivation of profit, increase the efficiency (and lower the cost). And if we cannot privatize them, we will use “motivators” characteristic of private enterprise – again see financial bonuses. And now a right-wing group of Koch-funded consultants and legislators is creating a proposal to essentially privatize the VHA, covered by Suzanne Gordon,
“The proposal they have crafted is an exercise in incoherence, denial, and magical thinking. he group believes that private sector hospitals would be willing and able to recreate VHA Centers of Excellence and other programs like the San Francisco VAHCS’s Center of Excellence in Epilepsy or Primary Care Education or Palo Alto’s polytrauma, blind or spinal cord injury rehabilitation programs. It also believes the private sector could fulfill the VHA’s research and teaching missions. As one San Francisco VAHCS researcher told me, “Can you see my eyes rolling?”’ http://suzannecgordon.com/the-plot-thickens/ 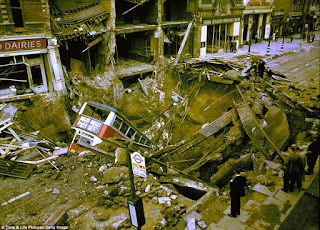 It is of more than passing interest that both of these events occurred in government agencies that were established to provide necessary care to people. In Britain, the National Health Service, established in 1948 to expand upon the National Health Insurance program that had existed since prior to WW I, is enormously popular because it provides care to everyone. Let’s think about this for a minute. 1948 was soon after the war. Britain, as most of Europe (but not the US) was in shambles, its population of young men decimated, its economy and industrial capacity largely destroyed, its streets covered with rubble from the Blitz (think the street scenes of East London in Call the Midwife from over a decade later), and the last thing that they had was “extra money”. 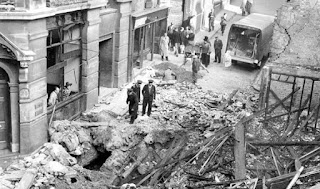 But the National Health Service was established, not as largesse in a time of plenty, but as a way of meeting the needs of the British people. In the US, a different story unfolded; with its industrial capacity intact and the need to shift from war to consumer production, the demand for labor exceeded the number of workers. Prevented from increasing wages because of wage and price controls, large companies found offering health insurance (non-taxable) a significant inducement, and found common cause with labor unions who could then offer these benefits to their members; a win-win that led to the employer-based health system that has characterized the US since.

In Britain, the Mid-Staffordshire scandal broke under a Labor government, but the seeds were sown when the Conservatives were in control. Recognizing that the NHS was far too popular to be dismantled, the Tories, seeking to emulate the US, both cut funding and established “NHS Foundation Trusts”, like Mid-Staffordshire, which were in a sense semi-privatized and incented to save money by being offered an opportunity to keep some of the savings, which could be used both for reinvestment in the hospitals and health system and to bonus those in charge. In the US, our services to veterans have almost never (as documented by Bloche) kept up with our rhetoric about the heroism of the men and women who serve in our military, and the VA scandal was tightly linked to cuts in funding. Indeed, some of the “solutions” offered by the same Congressmen who were responsible for the cuts involved privatization; this is often proposed as a solution to not having enough money, and almost never works, at least if the goal is improving quality.
As Suzanne Gordon says in her piece on the growing efforts in Washington to privatize the VA:
‘In their document, the Strawmen [the group working on this] justify their position on total privatization by pointing to the fact that the VHA is having trouble hiring new recruits to fill many staff vacancies because of the “stigma” attached to working at the VHA.  They also argue that the current VHA workforce suffers from “poor morale” and a “culture of fear.” Of course, VHA management practices could be significantly improved.  But if there is now a “stigma” attached to working at the VHA, a “culture of fear” within it, or demoralization among its current employees, that is, in great part, due to the bashing conservatives have unleashed in the media and Congress.’

But we’ll get back to that.

Thanks so much for this post and for pointing to the culpability of the politicians.

It is important to understand these events as examples of Campbell's Law (https://en.wikipedia.org/wiki/Campbell%27s_law):

"The more any quantitative social indicator (or even some qualitative indicator) is used for social decision-making, the more subject it will be to corruption pressures and the more apt it will be to distort and corrupt the social processes it is intended to monitor."

This means that if you create a very high stakes measure of quality, people will meet that measure even if it means worsening the actual process. The New Yorker had a sad article in 2014, discussing how the pressure to produce high test scores in Georgia (if not schools would be closed, teachers would lose their jobs) led to massive cheating on the part of students and teachers. http://www.newyorker.com/magazine/2014/07/21/wrong-answer

We see this every day in EMR's which require us to fill in meaningless boxes in order to get our work done. This corrupts our professional ethic as physicians.

This is just one more way in which apparently "tough-minded business thinking" is just plain dumb and destructive.