COVID-19 and the Bighorn Fire: Parallels and the "End Game"

Recently in traditional time, but long ago in COVID-19 time, I somehow got involved in a discussion on Facebook with a person I didn’t know. They had asked a mutual friend what was the “end game” for the pandemic, since people could not put up with the restrictions placed on them indefinitely. I said there was no end game, no one knew when it would end, and the only thing that we could do was continue to stay home, wear masks when we went out and social distance until – whenever. They were unsatisfied, and pointed out to me basic human psychology, which to them meant people will put up with inconvenience, even loss of income, for a period of time but needed to know “until when”.

As I said, that was weeks ago and things have changed, pretty much for the worse in most of the country. For a while you could squint and say that the national infection rate was plateauing, but that was mostly because New York accounted for such a high percentage, and its rate was decreasing. Most everywhere else it was on the rise, particularly in the South and West. I live in Arizona, where over the last week or so the rate of increase of COVID infections has been leading the country. Not the area where you want to be #1! This is mostly the result of early “re-opening” by a Republican governor, Doug Ducey. With the support of the GOP majority in the legislature, he allowed bars,restaurants, hair salons, etc.to open. More than that, he issued an executive order forbidding local government, cities and counties, from having more restrictive rules. This effectively undercut the efforts of the more populous cities of the state, such as Phoenix and Tucson, where I live, which had been requiring masks and social distancing. Tucson Mayor Regina Romero had closed restaurants and bars early on. Ducey’s illogic, characteristic of modern Republicans, was that he favored control at the most local level of government, except in a pandemic. Of course this made no sense; why is the state level better in a pandemic? Following that logic policy should be made at the federal, or even international, level. 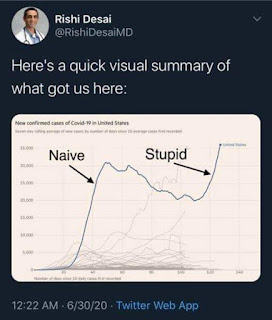 More recently, however, he has backtracked completely and allowed local government to make restrictive rules. Tucson and Pima County (much of metropolitan Tucson is outside the city limits) immediately enacted strict closure, mask and social distancing rules. The County is going to allow public health department officials to enforce masks in restaurants when the owners will not (by citing the owners and maybe closing them down). We will see how well they work, if people obey them (way back on June 19, folks were telling CNN -- published in the Arizona Star) that they saw no reason to, and eventually if the new surge in COVID cases and deaths begins to abate. I still cannot say when although I (and of course most people with medical, public health, or epidemiologic knowledge, as well as anyone who was paying attention) predicted the dramatic upsurge in cases. Now we have what is really not a “second wave” but a continuation of the first wave brought on by policies that were (most generously) optimistic, or (more accurately) the result of wishful, magical thinking enhanced by a misplaced desire to “restore the economy”. Dr. Anthony Fauci has just said we might expect as many as 100,000 NEW cases a day! And, of course, economically, things will be much worse (as noted by Paul Krugman) because the increase in disease and death, not to mention the closures, will make the economy tank much faster. And the relief that should have come has, typically, been insufficient for regular working people (how far can $1200 go??) and overgenerous (to put it mildly) to large corporations, many getting millions in bailout relief despite having billions in the bank, and C-suite executives who bathe in greenbacks (not of the $1 variety, either!); in Arizona the governor held on to federal relief funds without distributing them for a long time.

Something else very big is happening in Tucson now. A huge fire (called the Bighorn Fire because it started on about 200 acres on Bighorn Peak after a lightning strike) that started about a month ago has continued to grow despite heroic efforts by firefighters from across the West and indeed the country. It is raging through the iconic Santa Catalina Mountains north of the city; areas of the foothills have been evacuated. When I wrote about the fire in my blog “Life, the Universe, and a Few Things” on June 12, I had to put in an update as in a day it had grown from 3700 to over 7000 acres. As the weeks have passed it grows daily, and the spread is enormous. We have seen it go to 20,000, 30,000, 50,000 acres. Now that it has passed 100,000 acres, the newspaper is now reporting it in square miles – 180 square miles as of today – which, at 640 acres/sq mi is over 115,000 acres. Wildfires, particularly in the arid West, have become more common and more severe (think of the 2018 Camp Fire in California) with climate change brought on by global warming, but they are no less terrible for that. Sometimes, as with Bighorn, the cause is natural (lightning), sometimes the random accidental human, perhaps a camper who builds a fire where they shouldn’t or drops a cigarette, sometimes (as in the Camp Fire) by the criminal malfeasance of corporations (sensing a theme?) The structures most threatened in this, as most, wildfires, are the homes built too close, too high up in the foothills, lovely locations and views (if sometimes offensive to others) but highly at risk. 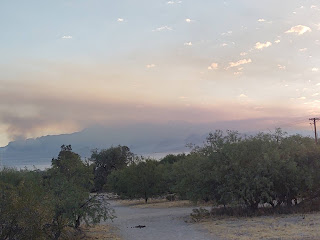 There are, you may have already noted, some parallels between the fire and COVID. The fire is burning and spreading because the ground is dry and because there is lots of brush that has accumulated in the mountains since the last fires. This is kind of like the people across the nation and the world who are susceptible to the virus. In some ways, it would be a better metaphor for rare severe influenza, or measles before a vaccine, when some (older) people had immunity and those who were younger didn’t, than for a novel virus like SARS-CoV-2, but you get my point. The fire will keep burning until it runs out of fuel, or the summer monsoon rains come, and the firefighters’ efforts keep it from being even worse – while growing, the fire, it is reported, is 45% controlled. The virus will continue to spread until susceptible people are dead or immune (but whether immunity lasts and is protective and for how long is uncertain), or there is a vaccine that is effective and widely applied, and good leadership and government policies can limit it from being even worse.

When there are good government policies, of course. We have seen almost total victories in places like New Zealand, movement back from the abyss in places like Italy and New York City, bright spots in states and cities that have moved as aggressively to limit human interaction, the crucial part of limiting COVID spread, as have firefighters to limit the Bighorn fire. But we have also seen disasters from terrible policy at the national level in the US as well as many states (including, but certainly not limited to, Arizona) and in other countries, particularly those led by arrogant, egotistical autocrats (see also Brazil, Russia, etc.).

The fire-virus metaphor is far from perfect, but it has some relevance. Our response to the fire was hurt by cuts to the funding of national parks and forests; our response to the virus was crippled by devastating cuts to the public health infrastructure. The “end game” for the fire is the summer monsoon rains, which will hopefully come soon. The end game for the virus is the development, manufacture, and VERY WIDESPREAD application of an effective vaccine. That may be on the horizon, but it is far away; even if a great vaccine is developed the application is a humongous undertaking (heck, in most of the US, certainly in Arizona, we can’t even effectively do testing!).

Until then, sorry about the psychology of “human nature”; staying away from people is the only answer.
Posted by Josh Freeman at 8:08 AM