A Paradigm Shift in Medicine? Gabor Maté’s "The Myth of Normal"

This is a guest blog post by Seiji Yamada, MD

TRAUMA, ILLNESS, AND HEALING IN A TOXIC CULTURE 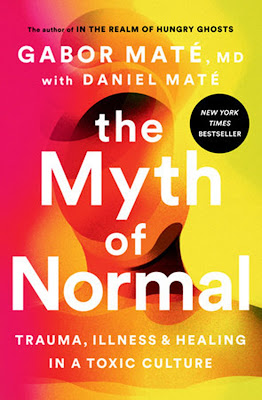 In The Myth of Normal: Trauma, Illness, and Healing in a Toxic Culture, family physician Gabor Maté presents a new formulation for understanding health and illness. Perhaps it is fair to call it a paradigm shift. Maté’s formulation implies that those of us who work in health care should be practicing differently. What might such a healing practice look like?

Firstly, the healer takes the side of the patient and the family – against the toxic culture that surrounds us. One component of the toxic culture that Maté identifies is capitalism, the valuing of corporate profits over human life, the relentless drive to extract private wealth while killing our ecosystem. Under capitalism, in order to stay financially solvent, pregnant women stay on the job until they go into labor. They return to their workplaces within weeks of giving birth. The stresses of working while pregnant, or the infant’s need for nurturing and attention, receive little attention.

Another component of the toxic culture is patriarchy, the control exerted over women and children’s bodies by men. In its ugliest form, this takes the form of sexual abuse and rape. Maté presents a number of case examples of how such past events become manifest as disease, not just psychological but also physical. The author, activist, and playwright V, who wrote The Vagina Monologues, recounts to Maté how abuse by her biological father led to her endometrial cancer.

Maté reviews the scientific basis for how our toxic culture leads to disease. As manifested by behaviors seemingly as trivial as not picking up a crying infant to crimes such as sexual abuse, the toxic culture of contemporary capitalism, patriarchy, and white supremacy leads to trauma.

This trauma then leads to the somatic and psychological dysfunction that becomes manifest as both bodily and psychiatric disease as well as problematic behaviors such as attention deficit and addiction. Of note, this account of disease is dynamic, changing over time. Rather than an entity that one possesses (e.g. “my cancer” or “my bipolar disorder”), Maté views disease as a temporal process with roots in the toxic culture within which we all live, as well as in events that might not even be subject to conscious recall.

Thus Maté seeks to transcend conventional biomedical modes of analysis. The biomedical paradigm is reflected in traditional medical education. Premedical students must take basic science classes such as biology, physics, chemistry, and organic chemistry as prerequisites for medical school. In the conventional medical curriculum, medical students learn basic sciences such as anatomy, physiology, pathology, and pharmacology before they learn clinical medicine. The biomedical paradigm is reductionist in the sense that it seeks explanations in more and more fundamental levels of analysis: Thus, the search for genes that cause this or that disease, or dysregulated neurotransmitters as explaining this or that psychiatric disorder.

The biopsychosocial model was formulated by the psychiatrist George Engel in the 1970s in opposition to the biomedical model. Engel incorporated the atoms, cells, organs, cognitive and emotional factors, and social influences such as family, community, even the nation-state into the model. (See figure.) As such, the biopsychosocial model is all-encompassing and potentially powerful in its explanatory reach, but the details of its workings, i.e. the underlying mechanisms were insufficiently fleshed out by Engel.

While Maté views himself as working within the biopsychosocial and social medicine paradigms, his contribution is to elucidate the epigenetic, psychological, neurologic, and immunological mechanisms by which oppressive social structures and the toxic culture of “hypermaterialist, consumerist capitalism” (p. 198) become manifest as disease.

As well, Maté critiques the reductionist program of behavioral psychology, originally formulated by B.F. Skinner, who derived his theories of behavior modification via rewards and punishments through experiments with pigeons caged in boxes. Maté is particularly critical of the child-rearing practices based on operant conditioning principles, e.g. advising parents not to comfort crying infants lest they feel “rewarded” for their “bad behavior.”

In discussing contemporary practices relating to the treatment of the young or the treatment of pregnant mothers-to-be, Maté references ethnographic accounts of the practices of cultures more in touch with nature, as well as how other mammals besides humans raise their young.

Maté reviews many cases to illustrate his points, but he also references his own failings. He attributes his touchiness about his wife not picking him up at the airport to fears of abandonment stemming from being placed under the care of strangers when he was an infant when the Nazis occupied Hungary. He regrets how his workaholism led to his absence from his children’s lives when they were small. By pointing to his own flaws and sharing how he is still trying to overcome them -  he holds out hope for the rest of us to heal ourselves also.

In the Structure of Scientific Revolutions (1962), Thomas Kuhn described how paradigm shifts work in science. Normal science under the old paradigm, e.g. the Aristotelian view of the cosmos with the earth at its center, seems to work well enough, but there are just a few anomalies that cannot be accounted for. Over time, these anomalies and contradictions accumulate – until somebody, e.g. Copernicus, comes up with a new way of looking at the data. The new way of looking at things works much better, of course, and has much better explanatory and predictive power.

When I introduce medical students to family medicine, I often reference chapter five, “Philosophical and Scientific Foundations of Family Medicine,” from the 2009 edition of McWhinney’s Textbook of Family Medicine, the last edition before Ian McWhinney’s death in 2012. In chapter five, McWhinney discusses the paradigm shift in medicine  - from the biomedical model to the biopsychosocial model – in the Kuhnian sense. Of course, the reductionist, biomedical paradigm continues to advance medicine. Take a look at the studies reported in any issue of the New England Journal of Medicine. In the clinical setting, however, we need to do a better job of understanding our patients’ pasts, their emotional lives. Organized medicine needs to do a better job of ending the hypermaterialist, consumerist capitalism that is making our patients sick.

I have advocated for the biopsychosocial model during my own medical and teaching career, though I will admit to (following Farmer) emphasizing “structural violence” sometimes and (following Waitzkin) “social medicine” at other times. (Farmer actually left out the “psycho” part and called his own approach “biosocial,” Pathologies of Power, p. 19.) Maté puts the “psycho” back into the biopsychosocial.

What does the practice of biopsychosocial medicine, informed by The Myth of Normal look like? How do I envision practicing medicine within the new paradigm?

Firstly, I will need to examine my own faults and shortcomings – similarly to how Maté subjects himself to self-scrutiny. In order to be an effective instrument of healing, I must first work on healing myself. Maté suggests how one might engage in “compassionate self-inquiry” (p. 431).

Secondly, I will pay more attention to the social lives of children. Are they given the opportunity to play freely? Do their parents have the wherewithal to bond with them? Do I encourage parents to respond meaningfully to their children’s emotional needs?

Thirdly, I will work on adopting a trauma-informed stance with patients. A first approximation will be to ask about adverse childhood experiences (ACEs). Many of those who share their illness narratives with Maté tell him, “None of my doctors ever asked me about that.” I hope to help patients recognize the roles that their illness plays in their life trajectories. I hope to help them heal.

Interesting as always! A typo I think: V wrote The Vagina Monologues (not Dialogues)