.
First, we must celebrate the victory of the people of Egypt in ousting the 30-year dictator Hosni Mubarak, and we revel in the democratic character of both this peaceful revolution and that in Tunisia last month. We hope that all of the dreams and aspirations of the masses of people involved are realized – freedom of speech, freedom for women and minorities, freedom from hunger. Thinking and reading about it brings tears of joy and admiration for these brave people. It is truly inspiring and encouraging to see this part of the world moving in the right direction. I feel that it may be wrong to have a post that dilutes this excitement with discussion of other topics, but take comfort in the fact that the papers, magazines, and blogosphere are talking about little else.
...

Unfortunately, at the same time it is sobering to think about how much, in the US, we are moving in the wrong direction (see Bob Herbert, “When democracy weakens”, NY Times, Feb 12, 2011). Politicians elected, with money coming from the wealthiest corporations and individuals, on the platform of promising to create jobs, do nothing of the kind (see Robert Reich, “The recession isn’t over until the jobs come back”, Kansas City Star, Feb 12, 2011. At the federal level, to the extent Congress is doing anything, it is giving money away to the richest and taking away from poor and working people. State legislatures are also focused on eliminating support for poor people, as well as oppressing immigrants and banning gay marriage – or any rights for gay people (see Charles Blow, “Repeal, restrict, and repress”, NY Times, Feb 12, 2011). And, of course, on further restricting abortion rights. Indeed, there are those in Congress who wish to eliminate Title X funding for contraception. Given that contraception is the most effective way to decrease the abortion rate, this seems bizarre, but only if you are into “reality-based” policy making.

Where is the good news in our country? We all know that there are lots of good people out there, doing lots of good things. In health care, much of the positive news is people pitching in, volunteering to try to fill the holes left by a health care system that does not, despite the Affordable Care Act (ACA), provide care for much of our population. One example is the JayDoc Clinic, an operation entirely run by students from the University of Kansas School of Medicine, featured in the Feb 12 Kansas City Star (“Student run JayDoc clinic serves the uninsured”). Great work, and a great article, but one result is going to be more people who are in need hearing about it, and further overwhelming the clinic. The JayDoc, like so many “safety net” clinics, is a “finger in the dike”, struggling to survive in providing basic care while billions are spent on what Don Berwick, currently head of the Center for Medicare and Medicaid Services (CMS) and his colleague Brent James at the Institute for Healthcare Improvement (IHI) call “rescue care”.

Meeting the basic health care needs of the really-needy is not only right and compassionate, but is likely to cost less (in dollars and pain) if it prevents serious illness later. Since this does not seem to be a focus of government, which is busy cutting taxes on billionaires like David and Charles Koch and cutting access to contraception, some progressive and thoughtful parts of the private sector have been creating models across the country. Many of these are detailed by surgeon and writer Atul Gawande in his article “The hot spotters: can we lower medical costs by giving the neediest patients better care?” (New Yorker, Jan 24, 2011).

Gawande examines several cities where efforts have been made to identify the sickest, neediest, and highest-cost-users of health care, and intervene to try to reverse or ameliorate the causes. Some of them, like the lead story of the program in Camden, NJ, are the result of hard and extended volunteer work, by Dr. Jeffrey Brenner and friends. Others, such as in Atlantic City, result from partnerships between existing institutions (in this case, a hospital and a union). None are the result of wise governmental leadership investing in these programs to reap a benefit of greater health and lower cost. In Red, Blue, and Purple: The Math of Health Care Spending, Oct 20, 2009, I discussed the implications of the fact that most people use little health care, and a small percent use most of it. Managed care in the late 1990s failed in part because it put major hurdles in the way of receiving health care for the large proportion of the population whose health care use accounted for a small percent of health care spending in any case.

The programs described by Gawande do the opposite; they identify the actual people who account for most of the health costs in these communities and provide services and support to help those people. In Camden, for example, 1% of the population – 1000 people – accounted for 30% of its costs. 900 people in two buildings (a nursing home and a low-income housing project) accounted for more than 4000 hospital visits and $200,000,000 in health care bills over a 6 ½ year period. And, as Gawande points out, Camden is not unique. There is no money for this from the public sector or insurance industry because it is being spent (in addition to insurance company profit and administrative waste) on “rescue care” for people with conditions that advanced so far because they never received sufficient preventive and primary care. 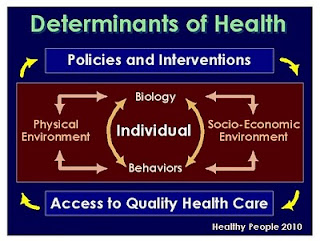 not being spent (indeed, as noted above, they are being cut) to support the myriad other “determinants of health”, social, economic, cultural and linguistic that are necessary for them to take advantage of preventive and primary care, to have the capability (Capability: understanding why people may not adopt healthful behaviors, Sep 24, 2010) of improving their health. Planning to achieve reductions in health care costs by “solutions” such as increasing copayments and deductibles so that people have “more skin in the game” are based on belief but not on facts. Gawande cites the experiences of benefit manager Verisk Health, which showed that such obstacles caused people to use less of all kinds of care – including primary and preventive care – until they finally got so acutely ill that needed to come to an emergency room, get admitted, go into an intensive care unit, so that costs in fact went up. One man “…had badly worsening heart disease and diabetes, and medical bills over 2 years in excess of $80,000. The man, dealing with higher co-payments on a fixed income, had cut back to filling only half his medication prescriptions for his high cholesterol and diabetes. He made few doctor visits. He avoided the ER – until a heart attack necessitated emergency surgery and left him disabled with chronic heart failure. The higher co-payments had backfired…” This outcome has been known for a long time; the RAND health insurance experiment in the 1970s and published in the New England Journal of Medicine in 1983[1] (see also: Joseph P. Newhouse, "Free for all?: lessons from the RAND Health Insurance Experiment", RAND 1993) showed that the opposite strategy – elimination of co-payments and deductibles -- resulted in higher utilization of health care; of both that which might be seen as “unnecessary” (colds) and that which was clearly necessary. And it saved money.

The interventions that have had success in Camden and other places were not “one size fits all”. Different people had different issues that required different interventions. Some were about poverty, some were about substance abuse or mental illness, some were about cultural misunderstandings or about language, and on and on. Interventions required more from nurse case managers for some people, social workers for others, physicians and nurse practitioners for others, and “health coaches” or promotoras for others. A lot of the latter; people who were familiar with the needs of the high-utilizer patients, who spoke their language, lived in their communities, and were often willing to “talk like [my] mother” to them.

And it is not always successful. But it is successful enough, far more successful than just pouring dollars into rescue care, that it needs to move beyond the limits that volunteers and a few forward-thinking institutions are constrained by. It needs to recognize the critical nature of teams, of integrating preventive and primary health care with basic social (and sometimes legal) services, with meeting core needs for food, housing and transportation that are all too often not even considered by policy makers. Funding is key; depending on volunteers in such efforts as these, or the JayDoc student–run free clinic will never come close to being a solution.

About Dr. Brenner’s program in Camden, Dr. Gawande writes “It remains unclear how the program will make ends meet”. In fact, these sorts of programs need to become the mainstream of health care and service delivery, and need to become the priority of federal, state, and local government.