Systemic racism is ubiquitous in the United States, despite the denial of its existence by Vice President Mike Pence in the vice-presidential debate. It is different from individual racism, the kind people most often talk about (frequently in the context of the phrase “I’m not a racist, but…”, generally indicating that they are). While it comes from the same roots, a belief that people of non-White races are not equal (and maybe not even people), it has then led to a structure, or set of structures, that continue to disadvantage people of color even when there is no current intent to do so; this is its insidious nature.

Structural racism has a big impact on health care, as this blog has often discussed. The health care system in the US has evolved within a racist structure, and as its inequities create victims, people of color are disproportionately affected. Ironically, often attempts to “solve” problems – of cost and quality in particular – exacerbate the situation and increase the inequities. The reason for this is that they are not comprehensive solutions, but rather compromises that have been arrived at, often after lobbying by hospitals and healthcare corporations, which continue to allow “gaming” of the system in a way that creates losers, and the losers are almost always the poor. And, as a result of structural racism, members of minority groups are overrepresented in the ranks of the poor.

This is not to say that there is never malicious or evil intent. There is, and, as usual, its roots are in money, the desire of institutions involved in health care to maximize their income and profit, and their influence on the policy-making process to allow them to pursue those goals. This is discussed in detail in a recent NY Times Op-Ed by Navathe and Schmidt, “Why a hospital may shun a Black patient” (October 6, 2020). The article identifies a number of ways that programs intended to address existing problems, have a negative impact on the poor and on minorities. The underlying structure is one in which doctors, and more important the health systems in which they work, are oriented to doing procedures that generate the most money in profit. This of course tends to discriminate against the poorly insured and uninsured, as I recently discussed (Hospitals compete for money, not the people's health. We need to stop this, August 31, 2020).

Navathe and Schmidt note several programs aimed at improving quality and lowering cost, all of which have the (presumably) unintended consequence of making hospitals and doctors less interested in providing care for higher-risk, poor, and minority patients. These include programs that pay for “quality” without taking into account the populations the hospital cares for; people who are healthier (and less poor) to start with have better outcomes. Other programs “rank” – and more important pay -- doctors and hospitals based upon their outcomes for surgical procedures; this provides strong motivation to not care for high risk patients. And

consider the Hospital Readmissions Reduction Program, which penalizes hospitals for excessive re-hospitalization. Again, the intention is noble: to discourage hospitals from skimping on care in a patients’ initial hospitalization such that the patient returns to the hospital soon after being discharged. But since people with worse living and working conditions are readmitted more frequently, hospitals that serve more worse-off racial and ethnic minorities were more frequently penalized.

The results are in. Those hospitals (especially public hospitals) that provide care for a much higher percent of poor and complex patients do much worse on these “quality” rankings, and thus get less money from these programs. Not only do richer patients get better care, but rich hospitals get more “bonus” money.

The COVID-19 pandemic has further exacerbated these inequities, creating a syndemic (Freeman J, “Something Old, Something New: The Syndemic of Racism and COVID-19 and ItsImplications for Medical Education”, Fam Med. 2020;52(9):623-5) that penalizes both poor and minority patients, who are more likely to get infected and get sicker, and the hospitals that care for them. Hospitals tend to serve the communities in which they are located, and the neighborhoods with higher concentrations of poor and minority people have been far worse hit, as documented by Feldman and Bassett in an article which looked at neighborhood poverty and mortality from COVID-19 in Cook County, IL (“The relationship between neighborhood poverty and COVID-19 mortality within racial/ethnic groups,” medRxiv preprint doi: https://doi.org/10.1101/2020.10.04.20206318, posted October 6, 2020). This is the first study looking at mortality among minority (Black and Latinx people) and neighborhoods relative to income. They looked at 3 kinds of difference: age (<65 vs >65), race/ethnicity, and income level (divided into 4 quartiles by neighborhood). For the younger (<65) population, the most important determinant of mortality was income, with those in the lowest income group having a mortality rate of 13.5 times that of the highest, but there was not a significant difference in mortality by race in this lowest income group. For the older group (>65), however race was an enormous predictor, with minorities having 3x the death rate of Whites, and  Whites in the lowest-income group having a lower mortality rate than minorities in the highest income group. 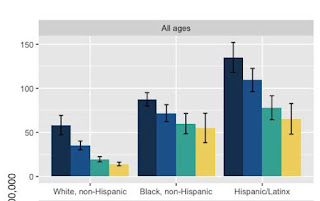 The two articles tie together. The worst disparity in mortality is in the over-65 group, which has Medicare and are thus not uninsured; however, they have the accumulated deficit of a lifetime of negative social determinants of health (SDH) with a much higher rate of pre-existing chronic disease. They also access hospitals that are overburdened with low income people which have, as described above, benefited less from “quality” and “value” payments. This, then, exacerbates the existing inequities of the system.

What to do? Navathe and Schmidt have a number of suggestions, focused on making reducing disparities a criteria for any “quality” or “value” based payments. They specifically suggest that this be an explicit goal for any program, that all such programs be subject to “disparity impact monitoring”, and that “we need a complete and detailed picture of the full extent to which payment reforms are conduits, or barriers, in reducing health disparities and structural racism.” These are good ideas, in fact are necessary to prevent unintended consequences from hospitals “gaming” the system.

But there is more that we can, and should, do. Navathe and Schmidt note that one relative success has been in programs that provided fixed funding to hospitals for all the services that they provide, rather than paying per patient or per procedure. This should eliminate any incentive to pick patients with better insurance or “better” (i.e, more profitable) diseases.  The example that they use is the Pennsylvania Rural Health Model, a collaborative effort by Medicare, Medicaid and private health insurers. Because these are rural hospitals which presumably provide care to everyone in the area, it can work. In an urban area, however, fixed funding can be susceptible to a third kind of “gaming”: selecting (by marketing to) people who are less sick and thus cost less to care for (“Oh, you have this [high cost] disease? Why don’t you try St. Elsewhere? They do a great job with patients like you!”) What we need is a system that combines strategies to prevent all three forms of gaming, by providing a fixed budget to hospitals that is not dependent upon the individual services they provide, but does take into account the cost of taking care of the population that they do, and is re-negotiated annually.

There actually is a system nearby that does this. In Canada. That is how hospitals are reimbursed under their single-payer Medicare system. That is what we need here too.

Looking at this blog, it appears you are suggesting, based on studies you report, that hospitals have a kind of risk based bundled payments that are like risk based capitation - and include data on the neighborhoods and other measures of high risk as well as potentially insured status, race and ethnicity. That is the way that the system has to go - capitation for primary care and bundled payments for hospitalizations (like DRG's) to begin to emphasize saving money rather than producing revenues. Great idea. See if it will work for low income rural communities as well and it might be a plan!!