Public Health, Abortion and Childcare: US far behind other countries

On October 3, I wrote about the viciously restrictive Texas (anti-) abortion law, The Texas Abortion Law is contrary to women, to science, and to human values. Texas is not the only state with such restrictive laws; in my own state, Arizona, a very restrictive abortion law has been passed by the legislature and signed by Republican governor Doug Ducey that makes it a crime for a doctor to perform an abortion on a woman “just” because it has a genetic defect (including those incompatible with life, or worse, yet, compatible with a short life full of suffering). While a US district court judge has enjoined the law, Arizona’s attorney general, Mark Brnovich, has asked the judge to allow him to continue to enforce that law while his appeal is pending. That could mean, of course, felony convictions for physicians. This follows the Supreme Court, in a “shadow docket” ruling, declining to invalidate that law despite a prior US Court of Appeals ruling that did so.

These actions by Republican-controlled states are all predicated on the assumption that the Supreme Court will soon invalidate Roe v. Wade and take away any Constitutional protection for women seeking, or doctors or others providing, abortions. This may well happen with a case on the agenda for this year challenging Mississippi’s draconian law virtually outlawing abortion. That this is a distinct possibility is because of the success of the Republican party and Sen. Mitch McConnell in ensuring that The Former Guy, Donald Trump, was able to appoint 3 justices to the Court, first by preventing President Obama’s nomination of Merrick Garland (the current US Attorney General) on the specious grounds that it was the last year of his term (while there were over 9 months left), and then going ahead and then entirely hypocritically approving the nomination of Amy Coney Barrett just a week before the election, which Trump lost. Thus we have a Supreme Court with 6 Republican justices of which Chief Justice John Roberts, Jr., is the least reactionary – but no longer a swing vote. Many, including Coney Barrett (referred to by NY Times columnist Maureen Dowd in her recent piece “The Supreme Court v. Reality” (Oct 9, 2021) as “Lady Handmaid’s Tale” for her advocacy for some of the repugnant and misogynistic practices described in Margaret Atwood’s book and the later TV series, strongly opposed to abortion. It is, of course, worth remembering that large majorities of the American people favor retaining the rights in Roe v. Wade, and that in some circumstances (such as rape and incest and a threat to the life of the mother) that support is overwhelming. Not, however, on GOP legislatures or on the Supreme Court.

Much of the support that exists in the US for overturning Roe v. Wade, and in general opposition to abortion, justifies itself by claiming abortion is murder, that they are only advocates for helpless fetuses, whom they call “babies”. There are undoubtedly many in their ranks who are consistent in their opposition to killing, opposing the death penalty and war (the late Joseph Cardinal Bernardin of Chicago comes to mind, and perhaps the current Pope Francis), but the vast majority of them, including all these legislators and SCOTUS justices, are not. And, indeed, their concern for babies and children only extends back from birth to conception, not forward from birth. We got you to there, they effectively say, but then you’re on your own. Or your parents are. This country is the meanest, using the word in both its senses, unkind and stingy, of all wealthy countries in providing support for infants, children and their parents. No box of baby necessities as in Finland (available for sale in the US, but provided by the government in Finland) . No requirement for parental leave. No guarantee of health insurance coverage, not to mention adequate coverage. No support for childcare. This one is the subject of a dramatic graphic included in the NY Times demonstrating how much countries in the Organization for Economic Cooperation and Development spend per child on early childhood care. The mean is $14,436. The second-lowest, Israel, is $3,327. Hungary spends twice that, Lithuania is over $8,000 and Slovenia over $11,000. The “poor” US comes in, as in virtually all measures of caring for its people, last, at $500. Well, you know, it costs a lot to provide care for its least needy; for the billionaires who need tax cuts. 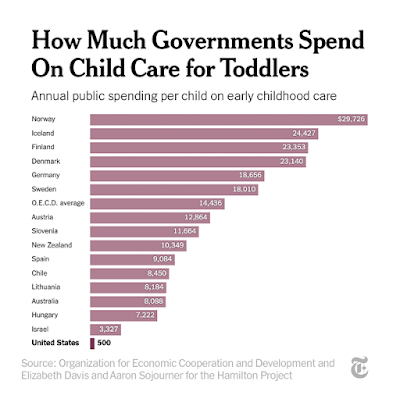 This, of course, does not bother the majority of the Supreme Court. They are not looking for consistency. They are looking for two things: 1) to enact their political agendas, and those of the Presidents who appointed them, and 2) to have people ignore #1 and lash out at people who point it out, painting themselves as victims.

Meanwhile, thing as better on the health front in the small Central American nation of Costa Rica, as described by surgeon and health care pundit Atual Gawande in the New Yorker (‘Costa Ricans Live Longer Than We Do. What’s the Secret?’, August 23, 2021). In a country with a “per-capita income is a sixth that of the United States—and its per-capita health-care costs are a fraction of ours—life expectancy there is approaching eighty-one years. In the United States, life expectancy peaked at just under seventy-nine years, in 2014, and has declined since.” This latter fact has been described in great detail in recent years, particularly in the work of Anne Case and Angus Deaton (in the Proceedings of the National Academy of Sciences, “Rising morbidity and mortality in midlife among white non-Hispanic Americans in the 21st century”, and discussed by me in Rising white midlife mortality: what are the real causes and solutions?, Nov. 14, 2015). Costa Rica, in 1970, had an infant mortality rate of 7%. By 1980, it was only 2%. “In the course of the decade, maternal deaths fell by eighty per cent. Part of the change is due to improvements in access to medical care, a characteristic of middle-income countries such as Costa Rica as well as most (obviously excepting the US) upper-income countries.” This points to the second big reason, and the focus of Gawande’s article, the emphasis on public health, on the health of communities, on interventions (and spending money) on things that improve the health of all people, in great contradistinction to the US focus on providing medical care for individuals.

Public health in the US is grossly underfunded, as has been apparent since the beginning of the COVID-19 pandemic. Well, it has long been apparent to those who thought about those things. The emphasis in the US is on individual medical care, and this is what is discussed by those who have power and those who fund them, and of course the mass of journalists and pundits.This is a failure of those who should be providing accurate information, but it is also the fault of our people’s willingness to deny a problem until it is right in their face. Many Americans do not even take the preventive measures that are easily available to them (the COVID vaccine, for some reason, comes to mind) and many others are unable to avail themselves of screening and early treatment because of a lack of money or decent health insurance and so end up in extremis and grateful for whatever invasive, expensive, and often unlikely-to-be-successful medical care is available. But, as I have said before, it is less common for people to wake each morning and be thankful that they don’t have cholera because they have clean water.

It is not that the American people are stupid or have the wrong values. If a large majority support Roe v. Wade, and much larger majority believes everyone has the right to health care and that we should have a universal health insurance system. And a huge majority (about 88% including 77% of Republicans) believe that drug costs are too high, that the reason is that drug companies make too much money, and that Medicare should be able to use its clout as the nation’s biggest insurer to negotiate drug prices. Also, while we’re on it, that all children should have an excellent education, and that childcare and parental leave are truly important priorities.

The only solution is to vote them out. Make supporting public health and universal health care and affordable drugs more important to re-election than opposing abortion rights.