Rising white midlife mortality: what are the real causes and solutions?

A widely covered and important health research study was recently published by Princeton economists Anne Case and Angus Deaton in the Proceedings of the National Academy of Sciences, “Rising morbidity and mortality in midlife among white non-Hispanic Americans in the 21st century”. The main message is contained in the title – mortality rates for white middle-aged Americans are going up – but there are three other important findings that emphasize its significance. 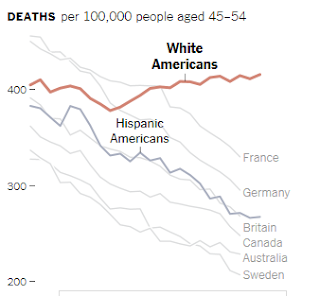 The first is that mortality rates are going down for every other age and ethnic group, as well as for whites of the same age in other developed countries (see graphic). This means something special is happening to this population group in the US. The second is that this increasing mortality rate is not evenly distributed across class, but is concentrated in the lower-income, high-school-educated or less, group of people. This begins to suggest what is special about this group: that they are being hit hard by societal changes that particularly affect them. The third is that the mortality rates for African-Americans, while decreasing, still significantly exceed those of this group of midlife whites. All of these bear further examination.

That these death rates are rising was apparently surprising to the study’s authors, according to the New York Times article “Death Rates Rising for Middle-Aged White Americans, Study Finds” by Gina Kolata on November 2, 2015, which begins with the sentence “Something startling is happening to middle-aged white Americans.” It surprises not only Case and Deaton, but also numerous commentators quoted in the article and in subsequent coverage. An example cited by Kolata is Dr. Samuel Preston, professor of sociology at the University of Pennsylvania and an expert on mortality trends and the health of populations, whose comment was “Wow.”  I guess this is an appropriate comment about an increase in mortality rates of 134 more deaths per 100,000 people from 1999 to 2014, which Dr. Deaton says is only matched by HIV/AIDS in current time.

But the findings are not too surprising to me. After all, Deaton and Case are economists, not physicians or health researchers, and they came upon this data almost serendipitously while studying other issues (such as whether areas where people are happy have lower suicide rates). But others, those who are physicians and health researchers, should know better. Maybe the doctors expressing surprise are those who don’t take care of lower-income people. And the health researchers are those who have not been reading. In a blog piece  from January 14, 2014 (“More guns and less education is a prescription for poor health”) I cite  Education: It Matters More to Health than Ever Before, published on the Robert Wood Johnson Foundation website by researchers from the Virginia Commonwealth University Center for Society and Health, which notes that “since the 1990s, life expectancy has fallen for people without a high school education, a decrease that is especially pronounced among White women.” This was reported over a year and a half ago, and discusses a trend in place for two decades!

Or maybe I am not surprised because I am a doctor, and see these patients both in the clinic and in the hospital. We do take care of lots of lower income people – those not in the 1%, or the 20% or even the top 50%. Yes, the bottom half of the population by income do exist, and many of them are white, and they are not doing well. The study by Case and Deaton indicates that the causes of death that are increasing the mortality rates in this group of people are not increases in the “traditional” chronic diseases such as diabetes, heart disease, and cancer, but are rather due to substance abuse (illegal drugs, prescription narcotics, and alcohol) and suicide. This is not to say that we don’t see much illness and many deaths from those other chronic diseases in this population; we do, and they account for the high baseline mortality among this group, but these other causes are the reasons for the rising mortality rate.

We have seen the explosion of prescription opiate use in people who (like Dr. Case, as it happens) have chronic musculoskeletal pain (despite increasing evidence that opiates are not very effective for such pain). This often results from their work as manual laborers, either from a specific accident or from the toll wreaked by chronic lifting, bending, twisting, and straining. We also see increased use of alcohol, that traditional intoxicant. While sometimes it seems that we hear more about studies touting the benefits of a couple of glasses of wine a day, the reality is that millions of lives are destroyed directly and indirectly by alcohol use: those of the drinkers, those of their families, those of the people they hit when driving drunk. And in both urban and rural areas (people in rural areas were particularly affected by the mortality increase in Case and Deaton’s study) the use of methamphetamine. And as the drop in standard of living for people who used to make their living with their bodies doing jobs that have disappeared or they can no longer physically do becomes clearly irreversible and leads to serious depression, often compounded by chronic pain and substance use, increasing rates of suicide.

What is only alluded to in some of the coverage of this study is the most important point: this is about our society failing its people. It is about the “social determinants of health” writ large. Yes, the direct causes of the increased death rate in this population are alcohol and drug use and depression leading to suicide, and we do need better treatment for these conditions. But to leave it there would be like looking at deaths from lung cancer and chronic lung disease and concluding only that we need better drugs to treat these conditions without considering tobacco. Our society has, for at least four decades, been somewhere between uncaring and hostile to a huge proportion of its people. Where once we were a land of rising expectations, where people who worked hard could expect to have a reasonably good life, this changed beginning in the 1970s. Jobs for those with high school educations started to become rarer, and in the Reagan 1980s, “Great Society” programs that supported the most needy were decimated. (For the record, the “War on Poverty” actually worked; poverty rates went down!)

In the 1990s, economic growth hid the concomitant growth in income disparities. With the crashes of the tech and housing bubbles leading to severe recession in the mid-2000s, the impact of these disparities became apparent. While there were protests in response (e.g., the “Occupy” movement), the banks were bailed out, the wealthy continued to grow wealthier, and working people have seen their jobs, incomes, standards of living, health, and ultimately lives disappear. Only the blind or willfully ignorant could have not seen this coming.

To a large extent, then, this is an issue of class, however much “important people” decry the use of that word. It is also an issue of race, since, as noted, mortality rates for African-Americans (although not for Latino/Hispanics) continue to exceed those of whites; even as they begin to converge, there is still great disparity. Camara Jones, MD, the new president of the American Public Health Association (APHA) uses the term “social determinants of equity” to describe why African-Americans are so over-represented in the lower class.  The current data showing that lower-income whites are moving toward the long-term disadvantaged should not obscure this fact, but rather remind us that white people have had a privilege that is now, for the lowest income, being eroded.

The irony is that many of the people in the groups reported on, and their friends and relatives and neighbors, voted for those in Congress and their states who pursue policies that make their situations worse. That the 1%, or 0.1%, or 0.001% (after all, 153 families have contributed 50% of all campaign donations this year!) like these policies is understandable provided that they are not only rich but selfish, but they alone don’t have many votes. That their money controls votes, both by buying advertising and directly buying politicians, is undeniable. Maybe poor people cannot contribute as much as rich people, but they can vote (most of the time) and there are so many more of them. If we must reject “trickle down”, we must also reject appeals for votes that are implicitly or explicitly racist; lower income white people are not benefiting by voting for the racists.  The lives and health of Americans will be improved by improving the conditions in which they live, by an economy whose growth is marked by more well-paying jobs, not money socked away by the wealthiest corporations and individuals. People, of all races and ethnicities and genders and geographical regions need dignity and opportunity and hope that is based in reality, not false promises.

Josh covers many of the upstream issues behind this.

Another is the lack of attention to early life when a large fraction of our health as adults is programmed. We in the US have among the highest rates of preterm delivery, low birth weights as well as infant and child health outcomes compared to other rich nations that compromise our health as adults. We are in the exclusive group of two nations that do not have a federally mandated paid maternity leave policy- the other being Papua New Guinea. And so on. These factors haunt our health in later years.

I summarize many of the issues in Bezruchka, S. (2015). "Early Life Or Early Death: Support For Child Health Lasts A Lifetime." International Journal of Child, Youth and Family Studies 6(2): 204-229.
available at http://depts.washington.edu/eqhlth/pages/resources.html
under readings.