Family Medicine in the era of health reform 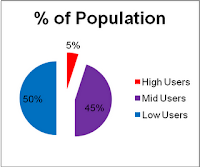 The second big problem is related to one that I have discussed before (Red, Blue, and Purple: The Math of Health Care Spending, October 20, 2009), the fact that most people are not sick. In an effort to control costs, everyone was made to jump through hoops, such as gatekeepers and prior authorization, which made them angry but did not do much for the cost, since most people do not use much medical care. Indeed, for at least half the population, you could let them do whatever they want, and they wouldn’t use any significant number of health care dollars. To illustrate this, I am reproducing the graphs from the previous blog.
While there are some things we can do to reduce the risk of unexpected crises –cancer, multiple trauma from car accidents, infants in NICUs – and control the costs of caring for those who have them, the most obvious benefit will be achieved by pre-emptively working with people whose chronic diseases have gotten so bad that they are frequently admitted, often to Intensive Care Units. These are the people who should be targeted for intensive intervention, not only medical but in terms of the social determinants of health, such as in the programs highlighted by Atul Gawande in his February 2011 New Yorker piece, “The Hot Spotters”. Needless to say, such interventions are being funded on a shoestring, while the high-tech interventions get all the money.
It doesn’t have to be this way. We could have a rational, cost-effective health care system if we start with coverage for all through a single-payer mechanism. We might be able to back into quality despite not having one, but it will be much harder.
<!--[endif]-->

<!--[if !supportFootnotes]-->[1]<!--[endif]--> Festschrift: “A volume of learned articles or essays by colleagues and admirers, serving as a tribute or memorial especially to a scholar”
Posted by Josh Freeman at 8:18 PM