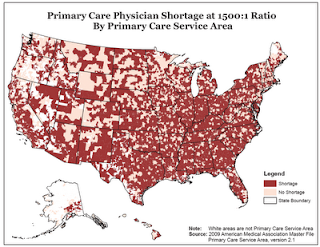 Bob Phillips MD, Executive Director of the Robert Graham Center, the American Academy of Family Physicians’ (AAFP) DC-based policy center, gave one of the plenary speeches at the recent annual meeting of the Society of Teachers of Family Medicine (STFM). His talk, available at the Family Medicine Digital Resource Library (www.fmdrl.org) presented a great deal of data regarding the current, and anticipated future, state of the US primary care workforce. There are currently 222,308 primary care doctors (FPs, GPs, general internist, general pediatricians and geriatricians), or one for every 1358 people, and an additional 86,000+ NPs and PAs in primary care, for a total of about 308,000, or about 1 primary care provider for every 1000. This is not a bad ratio, looking at the nation as a whole, but geographic distribution is another matter, with the ratio of primary care providers (PCPs) to person ranging from 500:1 to 5,000:1 in various primary care service areas (PCSAs); the nearly 5000 PCSAs with a shortage have a deficit of over 54,000 PCPs, which is equal to the “surplus” in the 1,600 or so PCSAs who have higher ratios. And, of course, those underserved PCSAs comprise the vast majority of the US geographic area (see figure).

[2] Hauer KE, Durning SJ, Kernan WN et al., “Factors associated with medical students’ career choices regarding internal medicine”. JAMA 2008;300(10):1154-64
[3] The benefit on cost of hospitalization, avoidable hospitalizations, and readmissions is more difficult to assess for general internists than for family physicians; this would be unsurprising given that their training in almost all in the hospital rather than in the ambulatory setting.
Posted by Josh Freeman at 5:23 PM