Family Medicine in the era of health reform - 2

This is the second of three parts presenting the content of the 21st G. Gayle Stephens lecture that I gave at the Primary Care Access Conference. It more specifically addresses the current status of family medicine, and in particular, family medicine training.
What about Family Medicine? There has been something of an uptick of interest in FM among medical students in recent years, which has been reflected in “better” matches: a larger number of US medical graduates (USMGs) entering family medicine residency training and fewer residency slots filled by IMGs; but these are small changes, nowhere near sufficient to meet the nation’s needs for primary care doctors.  In addition, we are not sure of the reason for this yet. We hope that it is a real increase in interest, but it may also be (and continue to be) a result of increases in medical class size and number of medical schools without a concomitant increase in residency positions, leaving more students who cannot match in their more desired specialties and thus “settle” for family medicine.
Common sense, and some recent data (especially regarding loan burdens), suggests that reimbursement is an major issue, and this is something I have addressed on several previous occasions (recently The challenge of expanded Medicaid and the dearth of primary care physicians, Feb 19, 2011). Although money (income and debt) was not found to be a major determinant of specialty choice in the “Arizona studies” several years ago;[1];, debt loads have increased since then, frequently exceeding $250,000 by the time of medical school graduation. More concerning, we are increasingly hearing reports of negative attitudes among medical students toward the real or perceived lifestyle of primary care, as well as persistence of the idea that primary care -- family medicine – is not as interesting or as challenging as practice in other specialties.
A recent article that appeared in the New York Times on Saturday, April 2, More Physicians Say No to Endless Workdays, illustrates many of these issues as it describes the decision of a young female student, Kate Dewar, to enter Emergency Medicine rather than the primary care practice of her father and grandfather. She is the mother of twins and although she says
“Look, I’m as committed to being a doctor as anyone. I went back to work six weeks after my boys were born. I love my job,” she adds “But I was in tears walking out of the house that first day. I’m the mother of twins, and I want to be there to feed them, play games with them or open presents with them on Christmas morning. Or at least I want the option to do those things without fearing I’ll be called back to the hospital.”
Yes, it is possible that her commitment is simply professed, not real; maybe in an objective sense she is not as committed to medicine as her father and grandfather. And if not, if she is more committed to her family, is that a bad thing? Her grandfather, Dr. William Dewar II, is quoted as saying “My son and I had deeper feelings for our patients than I think Kate will ever have… “ and her father, Dr. William Dewar III, adds “I’ve had three generations of [the owner of the café in which they are being interviewed]’s family under my care. Kate will never have that.”
Yes, but she will fewer work hours. The article notes that “…emergency room and critical-care doctors work fewer hours than any other specialty, according to a 2008 report from the federal Department of Health and Human Services.” And she will not get paid less for working those fewer hours; actually she will be paid quite a bit more. Personally, I have seen little indicating that, overall, students are willing to get paid less in exchange for having more time with their families.
What about the other part? The ostensible lack of intellectual, or at least, adrenaline-infused, challenge? The “Marcus Welby” vs “ER” dynamic? Kate Dewar told the Times “…that treating chronic conditions like diabetes and high cholesterol — a huge part of her father’s daily life — was not that interesting. She likened primary care to the movie ‘Groundhog Day,’ in which the same boring problems recur endlessly. Needing constant stimulus — she e-mails while watching TV — she realized she could not practice the medicine of her forebears.” 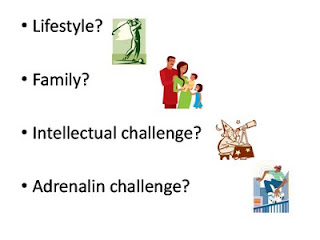 Constant stimulus aside – everyone emails while watching TV (is there any other way?) --  is she correct in that primary care does not have enough intellectual stimulation? If we look at medical and surgical subspecialties, it is hard to make that argument. They all see a much narrower range of diagnoses than primary care physicians do. For most of them, their top 5 diagnoses account for 80% or more of their visits; for family medicine our top 20 diagnoses account for perhaps 30%. Indeed, this is in part why we enter FM.
Is the Emergency Department really that different? There are certainly the big, exciting cases, but also a lot of routine. ED docs often complain that they have to do so much primary care – and they do it without gaining the satisfaction that doctors like the older Dewars get from seeing people get better over time. In addition to the primary care, there are the overdoses, and accidents, and the “frequent flyers” that characterize much of ED work. Yes, ED physicians can resuscitate people from the overdose – but they don’t treat the depression or the domestic violence that frequently was the cause. Yes, they stabilize fractures and abdominal trauma so that patients can be admitted to the surgeons (unlike on television’s “ER” where they seem to do major surgery in the ED, not to mention pushing babies back into the uterus of eclamptic women for whom there is “no room” on the labor floor – this would never happen!) – but they can do nothing to prevent the next one walking in. Yes, they admit the person from the nursing home with decompensated congestive heart failure and get them into the ICU – but if the patient lives until they can be discharged, they will be back again soon. Yes, they complain about the lack of primary care services available that make people come in with relatively minor illnesses, or even worse, with advanced stage illnesses that could  have been ameliorated by primary care – but they don’t want to be the ones to do it.
Kate Dewar says “I like it when people get better, but I’d rather it happen right in front of my eyes and not years later… [I] like to fix stuff and then move on.” At its face value this can be seen as an immature statement; while such attitudes can and do persist for an entire career for some people, they become less pervasive as doctors learn both the satisfaction that her father and grandfather demonstrate that comes from following patients over years, as well as the frustration that comes from “fixing” the same stuff over and over again. Of course, if she is an adrenalin junkie, maybe the ED will be a good place for her.
But the adrenalin rush can wear off, or be eroded. I worked for many years at Cook County Hospital, where there is a Department of Trauma. It recruits many skilled young adrenalin-junkies who want to be like Hawkeye Pierce on “M*A*S*H”, seeing people get better right in front of their eyes. Except not always. Often they don’t get better, they die. And then you have to tell their family. Another auto accident, another gang shooting, another alcohol-enhanced beating.  And then you have to tell their family. And then again, and again. And then, after a while, you get tired of it, which is why so many trauma surgeons spend so much of their time out in the community, talking to people, trying to prevent themselves from having more business. They want to decrease, not increase, their business.
Or maybe Kate Dewar just doesn’t have the interest in working with people over time and developing the relationships with patients that her father and grandfather did, and that all the stories they tell about their great longitudinal relationships with patients are, for her, dissolved in a memory of beepers going off as her dad sat down to dinner, or on Saturday and Sunday morning. Or maybe she is just selfish. I don’t know about her, but I think that all of these possibilities can apply to many different students.
What remains true, however, is that we  -- this nation – needs to change our health care business model, to keep people from getting so sick that they need emergency rooms and high-tech procedures. In Denmark, for example, the number of hospitals dropped from 190 in 1980 to 52 in 2004[2];, not because some have driven their competitors out of business but because they are no longer needed.
Wouldn’t that be a victory?
[1] Senf J, Campos-Outcalt D, Kutob R, “Factors Related to the Choice of Family Medicine: A Reassessment and Literature Review”, J American Bd of Family Practice, 2003, 16:502-12.