"Private Equity": Profiteers in nursing homes, Medicare Advantage, DCEs, and all of healthcare

What happens “When private equity takes over a nursing home” is the subject of a recent New Yorker article. What happens is not pretty, at least not if you are concerned about the care of the people housed in it. Presumably it is good for the private equity investors, if all they care about is making money (probably). Compared to the days when the particular home examined in the article was run by the Catholic order of Little Sisters of the Poor, it is more crowded, more poorly staffed, dirtier, and the people living there are sicker, get less care, and are more likely to die. Good thing it is making money for the investors!

Private equity, a bland-sounding term for ‘rapacious profit-seeking capitalist investors’, is taking over a lot of things these days, in healthcare and in other areas formerly run by non-profits or government, as well as traditional businesses. Sometimes this is occasioned by circumstances largely outside “the market” or government policy, which is true (to a degree) in this case -- fewer women are becoming nuns, and the “10 sisters to a home” ratio that they aimed for became impossible to keep up. Sometimes it is “the market”, without outside interference (hard to come up with these examples). Sometimes it is a result of government policy, driven by people (largely but not only Republicans) who believe anything run by the government is bad and should be run privately, and probably anything run by a non-profit would be run better by a profit-seeking company. They are starry-eyed idealists who actually believe this despite all the evidence to the contrary. Much or most of the time it is a combination of the last two, that is market forces created by government policies that give tremendous advantage to profit-seekers, including direct subsidies of public funds and freedom from the restrictions placed on non-profits and government agencies themselves. The most common form of the latter in government, of course, is to starve the budgets, underfunding public agencies so that the public gets legitimately upset by the lack of service, and “private equity” rides in like a “white knight” to save the day.

Of course, it almost never works. That is, if “works” means “performs the ostensible functions of the company or agency better”. That they almost never do, and they also almost never save money, and almost always end up costing more – paid either the taxpayer or ratepayer or public that purchases their product. If by “works”, however, we mean “makes money for the investors”, it frequently does. This scenario plays out across many industries and formerly public functions, but it has a particularly bad smell when the “product” that is being invested in and turned over to profiteers is people, and people’s health.

People in nursing homes are very vulnerable. That is why they are in nursing homes. Even the best ones face problems with staffing, a big issue in any industry owned by profiteers since the best way to fix this is to hire more staff and pay them better and the prescription for “success” by investors is to have fewer staff and pay them less. Such problems, however, are generally even greater for those nursing homes that care for patients on Medicaid, who include the always-poor and the even larger number of “never-were-poor-before-but-are-now-after-trying-to-pay-for-long-term-care”. While the large majority of people on Medicaid are young women and their children (Medicaid, a federal/state partnership, makes it exceedingly difficult for single adults or men to receive benefits in most states), the large majority of its spending is on the aged and disabled requiring long-term care including in nursing homes. (Medicare, the federal program for aged and disabled people, does not generally pay for nursing home care, except a few days after some hospitalizations.) The Kaiser Family Foundation notes that although only 5.5% of Medicaid recipients are in nursing homes, they account for 34% of its spending. 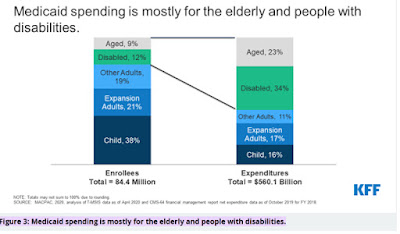 This lesson is a key one to keep in mind: everyone does not (and should not) use an equal share of health care, or account for an equal share of healthcare costs. Sick people cost more. Sicker people cost even more. Most people are not sick or costly in any one year. The aged, disabled, and those who have multiple chronic diseases are the sickest and among the costliest, and that is not most of us. The rest of us are not in that group until we are, either from gradually entering it as we age or suddenly falling into it from an accident or developing cancer. In general, not just nursing homes, about 3% of people account for 50% of health care costs and about 50% of the people account for 5% of costs. (see my post “Red, Blue, and Purple: The Math of Healthcare Spending”, Oct 20, 2009. It hasn’t changed much.)

Nursing homes are not the only healthcare institutions being turned over to “private equity”. Medicare, the most important health care funding advance of the last century, has been especially under attack. Traditional Medicare (TM) has two components; Part A, which pays for hospitalizations, is paid for by the Medicare Trust fund (your paycheck deductions), and Part B, which pays for outpatient care, by monthly premiums paid by recipients. Part C, now known as Medicare Advantage, is a privatized version of Medicare which, if you choose it, puts you essentially in an HMO, for good and bad. The good, the “advantage” is that it usually pays for all your hospitalization (TM only pays 80% of its approved charges, requiring most TM recipients to have a “Medicare supplement” insurance plan), and gives other services, including (sometimes) hearing and vision care, and even gym memberships! The bad is that, as in an HMO, you have a limited choice of doctors and hospitals, and except in an emergency they are usually in a limited geographic area. The worse is that these plans, mostly owned by insurance companies and increasingly by private equity, are only required to spend 80% of their premiums on actually delivering health care (and they pad even this with non-healthcare expenses, including executive salaries). The worst is that they don’t want you if you are sick (and thus will cost them money); those gym memberships cost little but hospitalizations cost a lot! They have many ways of encouraging healthy seniors to sign up (“cherry picking”) including lots of TV commercials, and even more inventive ways of discouraging sick people from staying in (“lemon dropping”). The money from this and other policies that funnel your taxpayer dollars to private companies is addressed in detail by former CIGNA executive Wendell Potter in his Substack where he documents how 72% of United Health’s income is from public funds!

The newest wrinkle, particularly good for private equity (and bad for Medicare recipients) is called Direct Contracting Entities (DCEs). These were created to address the problem investors had with Medicare Advantage identified above, that is, the ‘if you choose it’ part. Because with DCE you don’t have to! The DCE contracts with your primary care physician (or usually the company or health system that employs them; the physician often doesn’t even know about it!) and then all those physician’s patients are enrolled in the DCE even though they may not know it! This allows the private equity company to collect your Medicare $$ without your permission! And they have even addressed another ‘problem’: the DCE can keep 40% of your Medicare money as profit! What a deal! (BTW, this program will be renamed REACH in 2023, so don’t be confused. And Accountable Care Organizations, ACOs, have many of the same characteristics.)

So, look at how good this is! We get the government out of providing efficient cost-effective care by both starving the agencies for funds and encouraging (by $$) private investments. It works great! Well, for the investors. For you, probably not so much. But there is also a good chance it is working for your senators and representatives who may not only be getting campaign contributions, but even have stock in these companies.

We NEED a single-payer program that covers EVERYONE, such as an improved (covers every necessary service 100%, no 20% copay). We do NOT need scams such as Medicare Advantage and DCE/REACH that move us in the wrong direction!

Great post, Josh. Private equity is also building and running prisons and making a killing off of taxpayers by cramming prisoners into unsafe conditions. Like so many nursing home residents, they have no voice and society turns its back on them.

Thanks for your post. Gray Panthers (a nonprofit education/advocacy/social justice group was started in 1972 helped bring Medicare into being.
The National Council of Gray Panther Network rgeted private equity funds one by national private equity funds entering residential real estates around the country. It's a similar process of buying properties, and the expense of renters with limited incomes using public funds. These behemoth sharks with no experience as landlords are picking up multi-family housing complexes for working class families, students, and seniors, including HUD-financed affordable housing and naturally occurring retirement communities such as mobile home parks.